Womb Raider: “Knocked Up” Delivers On All Accounts 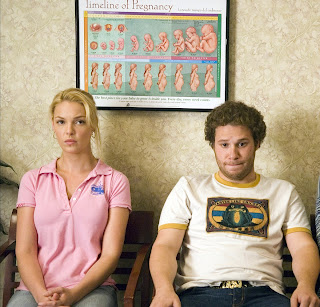 “Knocked Up” is, so far, the funniest movie of the year and one of the best. Now I realize we still have more than 6 months to go, but I have found 2007 to be kind of lackluster. There are plenty of good movies, but not many excellent ones. “Knocked Up” is an amusing riot from start to finish. Director and writer Judd Apatow has made a movie that takes everything everyone loved about the “The 40 Year Old Virgin” and makes an uproarious, affecting and, best of all, intelligent movie about human nature that’s worth every penny of the ticket price.

We’re first introduced to Ben Stone (played by Seth Rogen). Stone is the most appropriate last name for this slacker because he spends most of his time with his friends in a drug induced cloud of stupor. This unproductive twenty-something lives in a messy crib with his fellow slacker buddies Jason, Jay, Jonah and Martin (who all have the same first names in real life). Their dream job is starting a website in which they catalogue all the female nude scenes for every movie ever made. They can tell you who strips, when and for how long. I guess you could call them entrepreneurs. It’s obvious that Ben has no real goals in life and enjoys sitting on his bum. Maybe we’re all just a little bit jealous of him.

Then we meet altogether Allison Scott (played by Denny-loving “Grey’s Anatomy” star Katherine Heigl). She works behind the scenes for the cable TV network E! and has just been promoted to an on air job interviewing celebrities. This is not before having to deal with a complaining Ryan Seacrest (in an amusing cameo) who believes, along with the rest of the world, that Jessica Simpson is simply dumber than mud. Allison lives with her sister Debbie (the wonderful Leslie Mann) and her husband Pete (the indispensable Paul Rudd) and their two adorable kids. Unlike Ben’s life, Allison’s life is going somewhere and she’s destined for great things. Then after a night out of celebrating with Deb, Allison and Ben’s lives collide: they meet, they drink, they do it, and Allison gets pregnant.

Apatow stages every scene with some form of humor, emotion, reality, believability or wit. Every scene has a pay off. Debbie and Pete are supposed to be a reflection of Allison and Ben. I loved how Debbie and Pete (who are in a rut) aren’t just supporting characters, but they have their own appealing story arc as well. These characters are all realistic people who, to me, have scarily realistic conversations. If you don’t believe that people talk like this and reference pop culture every 10 seconds, listen in on my conversations with friends. They even quote movies with each other. And by golly Paul Rudd does a great Robert De Niro impression!

Heigl and Rogen seem like an odd match but that’s exactly the point: we all know that opposites attract. Here we have two completely different personalities who are forced to bond. We get to watch their struggle to get to know each other, become friends and possibly fall in love. These two actors are great at portraying the emotions they both go through in this extremely stressful situation. Their encounters are natural, realistic, charming and truly successful in terms of believability. Their quest to get through their pregnancy and start a new life is such a rewarding experience. Apatow knows that comedy and drama fit hand in hand.

There is so much to love in this movie it’s impossible to describe all of it. Rogen’s slacker/drugged up friends are so completely likable I forgot that in real life I would probably find these people annoying; they have no real jobs or motivations yet Apatow has given them amazingly funny things to say. For instance, one slacker says his bearded friend’s face looks like Robin Williams' knuckles. As Heigl’s older sister Mann is comic gold (you’ll probably remember her as the drunk woman who wanted French toast and vomited on Steve Carrel in “Virgin”). And her 7-year-old daughter spends her free time Googling words like “murder” on the Internet.

The whole screwball pregnancy comedy has been done before, in fact, it has been done to death. But somehow Apatow has created a surprisingly original take on the “she’s having a baby so we’re all going to act crazy” comedy. There are no talking babies or high concept ideas here, just great writing and funny characterizations (and plenty of entertaining improvisations). It’s true that this is a perfect combo of “Nine Months” and “Animal House.” The dramatic parts are real and emotional; the funny parts are comical and sharp. It’s probably one of the best combinations of comedic raunch and truthful drama. It seems that Mr. Apatow and all involved have delivered a million dollar baby. GRADE: A

They believe in excellent client service and treat their clients the same way that they would
like to be treated. You will find it vital to find an attorney
that practices exclusively in auto accident lawyer accidents.

The goal of the foundation is to provide limited financial aid to individuals in this field
should they become ill or injured and not be able to work.