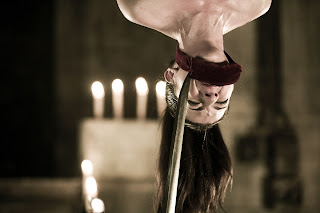 One thing came to my mind while watching “Hostel Part II:” The guys who run Guantanamo Bay must serve double duty as members of the MPAA film ratings board. Or at the very least Rob Zombie must be the head of it. (Of course I know better after seeing the informative documentary "This Film is Not Yet Rated")There’s no other explanation as to why this film got an R rating except that it’s bound to make a killing at the box office. But let’s be honest, that’s no real reason to dislike a movie because frankly this isn’t half bad. In fact, I liked it much better than the first Hostel, so director Eli Roth is headed in a good direction.

The first film was over hyped, they used Quentin Tarantino’s name in vain and the ads claimed the movie was based on actual events. Yeah sure. But here there’s no hype, no overwhelming urgency to check out the second hostel chapter, and yet after seeing it, I have to say I enjoyed it a lot more than it’s predecessor. The first film took too long to set up the idea of a sadistic hunting club that pays big bucks to torture and kill backpackers. Here we already know about the existence of this torture palace so we can get to the good stuff with minimal exposition. We’re introduced to new characters and we actually get to see more of how these sick bastards actually get to “purchase” their victims: eBay-style of course! Richard Burgi and Roger Bart are two buddies who fly out to Slovakia to take part in the fun. I enjoyed and didn’t predict how their characters would eventually turn out.

I liked how the opening picks where the first film left off: Paxton (Jay Hernandez) has escaped by train with only eight fingers. I honestly wanted Paxton to die in the first film because he was such a misogynistic jerk, but by the end it was hard not to root for him. These sick freaks who pay to torture these people are so perverted you couldn’t help but hope for Pax to get the heck out of there. But I’m glad his role here is short.

The film then introduces its new main characters pretty Beth (Lauren German), skanky Whitney (Bijou Philips) and geeky Lorna (Heather Matarazzo basically reprising her Dawn Weiner character) as they decide to travel to Slovakia from their art school in Rome. Roth makes the good decision to make them female, not annoying frat guys. Having women in the leads means a scarier, more suspenseful film (Case in point: “The Descent,” go rent it now). Having females in danger, for the most part, is scarier than men in danger and that’s the way it’s been since horror films have been made. I know it seems wrong to constantly have women in peril, but it works for the audience’s benefit. And Roth has written female characters who aren’t complete morons or jerks like in the first film. The non-bloody scenes aren’t as torturous the second time because I actually found myself enjoying the characters. I enjoyed Lorna even if I didn’t understand why she went on this vacation with the other girls. But the way it works here is the more you care about a character the quicker they die. It takes a while longer to give a crap about the skanky blonde and the pretty brunette.


Having said all that, let’s get to the reason people want to see movies like this: gore gore gore! I don’t think Eli Roth should be locked up for showing such graphic violence although I’m sure some would put him on the same level as the fictitious Hannibal Lector. I have to give him props for having the guts to go full out with his movies, this by far out surpassing the horrible (and unintentionally funny) Cabin Fever. The violence here is mostly so extreme that it borders on the silly and anyone with half a brain will realize that you shouldn’t take all of this too seriously. I mean how serious can you take a film that has a man’s genitals being cut off and fed to dogs? Roth uses the extreme violence as means to comical catharsis. Crazy I know, but I need give myself a reason to think any of this junk is actually worth my time and money. (And by the way, I’m not a parent and I know that if you bring your child to see this, you are more messed up than Mr. Roth himself.) There is one scene that is so perverse and disturbing that you actually feel for the poor character. In fact you may even feel for the humility of the actor. He takes it that far.

Roth is simply paying tribute to the gross out films that he grew up on in the 70s and 80s and can you blame him? Growing up watching the likes of Wes Craven, Tobe Hooper and George A. Romero (let alone Faces of Death) obviously had an effect on someone, which I have to respect. And here we are in a new generation of torture horror with the Hostels, Hills Have Eyes, High Tensions and Saws. “Hostel Part II” is not a film for everyone, but aren’t you curious about it in the slightest? No? Well obviously. GRADE: B

Did you create this website yourself? Please reply
back as I'm planning to create my own site and want
to know where you got this from or just what the theme is named.