Danny Ocean, Prince of Thieves: “Ocean’s 13” Fits Somewhere Between 11 and 12 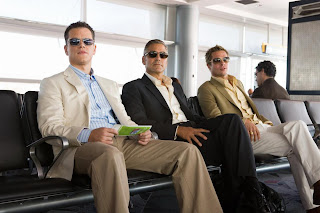 Ah, to be George, Brad or Matt. They could make utterly awful films and yet they’d still manage to be superstars. “Ocean’s 11” brought them all together. It was fun, exciting and memorable. Then there was the sequel “Ocean’s 12.” It was not fun, boring and forgettable. After the disaster that was “12” I was all but prepared to never give Ocean’s con gang a third shot. And now with “Ocean’s 13,” it’s mostly a mixed bag. Put simply it’s better than part 2 but not as good as part 1.

“Ocean’s 11” was a great movie. It had a great structure: Here’s Danny Ocean, here are his con artist men, here is the bad guy, let’s rob him. Fun, comedy, suspense, suaveness, style and plot twists abounded. “Ocean’s 11” was the definition of cool. “13” brings us back to the casinos where the audience feels right at home. The cast is good as usual, and I welcomed the wonderful Al Pacino and the sultry Ellen Barkin (who has some humorous scenes with Matt Damon) to the cast, however when you’re pushing eleven main characters, adding more only takes screen time away from the others. Thankfully there’s not a traditional love story subplot to waste any time.

What’s missing is the key to why the first film was such a success: screenwriter Ted Griffin. His story was great (with a good setup and interesting twists), his characterizations were great (was it his idea to have Brad Pitt eating something in every scene?) and he truly made you care about what was going on. He put you on the side of expert thieves and con artists (like he did in his other phenomenal script “Matchstick Men;” go rent that now!) and perfectly balanced all of the numerous characters. The first film was such a fun and rewarding experience. George Nolfi’s screenplay for part 2 was horrendous. It was jumbled and muddled and he turned everything off that we liked about the characters. Sorry I’m venting, I never got to write a review for that piece of garbage. And now we get writers Brian Koppelman and David Levien who wrote the popular poker drama “Rounders.” Their first smart move is to set the film in Vegas where it’s hip to be cool and it’s even cooler to be George, Brad or Matt. Their story revolves around Pacino’s hotel owner scuzball who double-crosses Elliott Gould. Gould ends up in the hospital because the double cross apparently gives him a heart attack. So Ocean and his gang of merry thugs decide to give Pacino a taste of his own medicine.

It is fun to see the gang working together again to squeeze all the money out of the hotel’s casino in one opening night evening. Instead of just robbing him, they’re going to rig all the games so that the everyday gambler can walk away with the millions. A decent idea, that’s not exactly pulled off well. There’s still plenty of confusion here. The first film was never confusing. The film expertly handled each set up so that we, as non-experts in committing crimes could understand what was going on every minute. We were right in there with the gang; here we kind of feel like an outsider, forced to ask the person next to us, “Do you get what they’re doing?” And probably the silliest stuff here (almost as silly as Julia Roberts pretending to be Julia Roberts in "12") involves David Paymer as a hotel rater who's stay at the hotel is less than spectacular.

The film’s strongest element is it’s director who also doubles here as his own cinematographer. He is a visual storyteller whose style is just simply scrumptious. I wouldn’t be surprised if he used thirteen different colored filters. He paints with his lens and the film is worth it to see all those beautiful saturated colors.

Ok ok so the bottom line here is if you enjoyed “Ocean’s 11” you’re probably going to think “13” is adequate. But that’s just the problem. If you’re going to make a third ocean caper then it’s got to be great not just adequate. I don’t want to say that the movie robbed me of my two hours, but, like Pacino's character, I felt cheated. GRADE: C+

Howdy just wanted to give you a quick heads up and let you know a few of the
pictures aren't loading correctly. I'm not sure why but I think its a linking issue.
I've tried it in two different web browsers and both show the same
outcome.

I am very happy to read this. This is the kind of manual that needs to be given and not the random misinformation that’s at the other blogs. Appreciate your sharing this best posting.