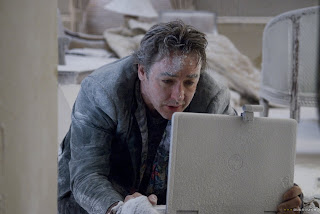 There are plenty of scary movies that take place in and around hotels and motels. “Psycho” is probably the most famous and most classic motel chiller. It was a film that not only caused many Americans not to bathe but most likely put small mom and pop motels out of business due to it’s classic Bates Motel setting. “The Shining” put the Overlook Hotel on the cinematic map due to its creepy effect on Jack Nicholson’s character. It turned him mad and it frightened the audience. And I’m probably the only one who is scared of the 13th floor of hotels due to the horribly bad yet incredibly watchable made for cable thriller “Nightmare on the 13th Floor.” Hotels can be scary places and the latest film “1408," while not destined to become a classic, is no exception.

John Cusack plays a writer who travels all over to find the most haunted places. He stays in hotel rooms where murders and other strange happenings occurred. But unlike other cinematic ghost hunters, he doesn’t actually believe in the hauntings. He writes these books because it’s a way of dealing with a past tragedy in his life. He refuses to believe anything of a supernatural nature; that is until he checks into room 1408 at the Dolphin Hotel in New York City. Hotel manager Gerald Olin (Samuel L. Jackson) insists that Mike Enslin (Cusack) not stay in room 1408. It has a terrible, violent past. There have been over 50 strange deaths because of that room. People check in and they don’t check out. The room has strange presence that can’t be explained; yet Mike knows there has to be a rational explanation. Let’s cut to him staying in the room as he proceeds to have the most terrifying experience of his life.

Swedish director Mikael Håfström has some interesting twists up its sleeve and in doing so he makes a very creepy movie. The plot mainly consists of Cusack trying to get out of the room once he knows it’s a realistically creepy place to be. And by the way Cusack goes give a great performance in what is essentially a one-man show. I guess had Samuel L. Jackson been in it more, they might have had to add snakes to the title in some form. The room itself is technically proficient. It’s a fantastic example of wondrous production design. We get to know that room inside and out and the various ways Mike attempts to escape it are eerie. The film establishes the room’s sinister presence the moment Cusack steps into it. The film does a great job of turning what appears at first to be an ordinary hotel room and making us believe it’s an area of hell on Earth. This movie has many genuinely frightening moments guaranteed to give you the chills.

Ghost movies or haunted place movies are almost always bogged down by too much exposition. The film sets up the room as a sinister place and that’s all. We don’t learn anything we don’t need to know. And there is usually way too much about why a person would choose to go into a haunted place if they know so many have died there. We buy right away that Cusack would go in there because he’s a non-believer. The reason he doesn’t believe is explained through a third act plot development in which we learn he has a young daughter who was ill and died. I would have liked not knowing about his daughter, since it comes into the film more as a plot revelation, yet it’s shown in the trailers, so I haven’t really spoiled anything.

We later learn that he doesn’t believe in God, because if God were real he wouldn’t have let his daughter die. Of course the point of the movie is to show how one can become a believer in the course of short time; in the case of this film an hour spent slowly becoming mentally disturbed by staying in this haunted hotel room. Most horror movies do have a positive view of religion whether it’s “The Exorcist” or “The Omen.” Here we witness a man who refuses to believe in the otherworldly who slowly comes to the realization that there are things in life that you can’t explain. And in doing so we as an audience member are welcomed into making our own theories about the unexplainable. I guess I’m getting a little too deep. The point is to see this film, be creeped out for 94 minutes and go nowhere near any inn called the Dolphin Hotel. GRADE: B