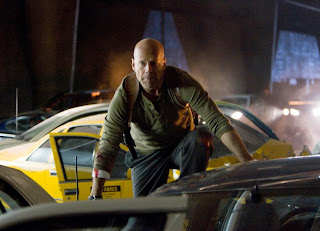 Perhaps they could have called it “Die Hard: Byte the Dust.” The fourth installment of the macho Die Hard series is an action thriller for the computer hacker generation. While the film ups the action ante it also adds lots of techno jargon and shots of computer screens doing things that I’ve never seen them do in real life. But it is a true fact that we rely too much on computers and technology, especially in this high tension, post-9/11 world. Bruce Willis returns to the role that made him an action icon as John McClane who must foil a plot that could bring doom to nearly half the country.

Speaking of 9/11, it’s interesting to see how action films have changed since September 11, 2001. If you look at Die Hard with a Vengeance (or any of the original trilogy for that matter) you’ll notice how particularly “unscary” the terrorists seem. They’re unrealistic and cartoonish. You never really fear for the civilians’ lives in these films because terrorism seemed like a fantasy. But now we know after 2001’s tragic events that very bad people can do a lot of serious damage. And now movies are mentioning 9/11, these films are set in a world where terrorism is our biggest concern and national threat. It has become personified in people who despise our American way of life. Terrorism has become an evil cinematic predator, not just a loony bunch of foreigners with machine guns toting one-liners.

Here we can see that terrorists don’t have to be from a foreign country. We get thirty something “Scream 2” villain Timothy Olyphant, as Thomas Gabriel, who wants the power turned off on the eastern part of the US. Why you ask? We’ll that’s a third act development, so that means it’s hush hush here. But I will tell you that he does have a coolness to his evil personality that makes him even more sinister. He’s the villain that dresses nicely all in black. He could spend his days shooting the LL Bean summer catalogue in-between his villainous duties. He heads a ragtag team of techo-nerds who hack into the country’s computer systems. They turn all the traffic lights green, they cause anthrax scares in Washington DC buildings, and they can even cause traffic to run into each other in underground tunnels.

Speaking of computer nerds, this time McClane is paired with the Mac guy from those Apple commercials. Justin Long is a fun, hip addition. He’s sort of the computer geek ying to Timophy Olyphant’s computer geek yang. Instead of the stereotyped minority sidekick (like in “Vengeance” with Samuel L Jackson) Long is a computer hacker who is on Gabriel’s hit list, until McClane foils the assassination attempt. Any computer geek who knows what Gabriel is up to needs to be disposed of. And this is no building or airport McClane must save, but nearly half the country. There is no transportation, communication or electricity and congress has been evacuated. It hasn’t been this crazy since the non-existent Y2K bug failed to show itself. And to make matters worse, McClane’s teenage daughter (Mary Elizabeth Winstead) just might make a perfect feisty hostage.

The film doesn’t seem watered down in terms of violence even though this is PG-13. Honestly, making a Die Hard film that anyone can get into seems worse than giving "Hostel 2" an R rating. I mean seriously should a group of unsupervised 10 year olds go see this film? While there isn’t much actual graphic violence, the intense crashes, consistent gunplay and glossy coolness factor all just seem wrong for impressionable youngsters. While the violent action is just a little far-fetched it seems extremely plausible for young children to get their hands on guns and try to act cool by firing weapons.

Director Len Wiseman (“Underworld”) has a good visual sense and his strong suit here is definitely action action action. I mean he makes McClane take out a helicopter with a car just because he was out of bullets. The other addition I enjoyed here was Maggie Q as the slinky, sexy Asian baddie who gives McClane a run for his fighting money. Their fight sequence is a highlight and McClane’s one-liners, including his description of this poor henchman’s demise, (she’s a villain she’s gotta die right?) is priceless and too good to spoil here. “Live Free or Die Hard” is a slick, action-packed movie. It’s a great summer flick that brings the Die Hard films into the 21st century with style, humor and impressive stunts. GRADE: B+

You need to take part in a contest for one
of the finest blogs online. I most certainly will highly recommend this website!