Fantastic Bore: “Rise of the Silver Surfer” is Anything But Tubular 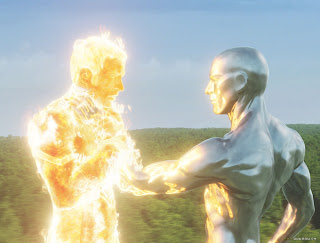 I enjoy average movies. Heck, I even enjoy bad movies. I’m sure on some level everyone does. Sometimes you just want to sit back and relax and take in a goofy, silly, horrible movie that revels in it’s awfulness. Then there are the ones that are so bad that you wish you were actually watching a good movie. First off, dont get me wrong "Fantastic Four Rise of the Silver Surfer" is not a horrible movie. Yet it’s not a fantastic (pun intended) movie. It’s somewhere inbetween, but it’s a movie that while watching it will make you long for something else, anything else. It’s not so much a problem that yes it’s kiddie, immature and cartoonish (think Saturday morning level children’s entertainment) but it’s not even good kiddie, immature and cartoonish entertainment. It’s better than the first film which shows just how awful the original truly was.

As directed by Tim Story, who was also responsible for “Barbershop” and “Taxi” (what exactly qualifies him to direct this?) the film is not even on the level of so bad it’s good. First of all, the film just looks boring. The cinematography is too bright; there’s too much key lighting and if you’re going to shoot a bright movie at least make it colorful. This looks more like a comedy than a superhero movie. The action is not all that exciting. It’ll cause you to yawn more often than grip the arm rests. Also, because of the success of the "Spiderman" films, "Batman Begins" and the "X-Men" films, we’re all used to dark, mature, entertaining comic book superheroes, not a bunch of clowning around. And now that this film has acquired a PG rating, we know from the beginning that perhaps this is going to be more along of the lines of "Power Rangers" rather than the brooding drama of a "Batman." Because many of the recent comic book movies are so good, it’s easy to distinguish "Fantastic Four" as simply sub par.

The best performance of the four main cast members is still Chris Evans, as Johnny Storm the Human Torch, who’s got that cocky, hip attitude down pat. Jessica Alba (Johnny’s Invisible Woman sister Susan Storm), who looks like she just came back from the drag show Nomi Malone “Showgirls” look-a-like contest, attempts some vague emotion. Ioan Gruffudd as the future husband of Miss Storm is pretty wooden in the role of the scientist leader. His acting is stiff and I’ll blame the director for letting him give such a boring performance. (And speaking of stiff, is there a reason why this guy gets nervous around beautiful women at his bachelor party? Doesn't he realize he's marrying Jessica Alba??) Michael Chiklis (TV’s “The Shield”), who is under lots of rock make-up, has some good one-liners as The Thing. He has wooed the blind woman from the first film into a full-fledged relationship. But I guess hearing Lionel Richie’s “Hello” on the soundtrack was never meant to be.

The script in this second installment written by Don Payne and Mark Frost revolves around a bunch of global anomalies that have been occurring around the world ala “The Day After Tomorrow.” Los Angeles has a black out, what a shocker. Asia’s oceans have frozen over. And other strange catastrophic events are occurring (One of which leads to the resurgence of Dr. Doom, played by Nip/Tuck’s Julian McMahon). It’s as if the planet were dying. Of course it’s left at that because this isn’t “An Inconvenient Truth” or anything. It appears the planet’s fate is in the hands of some sort of celestial villain who is controlling a T-1000 look-a-like who rides around the world on his silver surfboard. This “Silver Surfer” (who kind of looks cool) as he is eventually nicknamed might just be a big enough match for the Fantastic 4. Of course that puts the dampers on Susan and Mr. Fantastic’s wedding plans (They have to stop a crashing helicopter during the ceremony in a unexciting, yawn-inducing sequence).

One amusing idea the film has to offer is when Johnny comes in contact with the Surfer it causes his powers to shift with whichever teammate he touches. So when he embraces his sister Susan, she bursts out in flames crying, “I’m on fire! I’m on fire!” Eventually Johnny is able to use all four powers to help defeat the enemy. And it’s ok kids, because the Silver Surfer is really a good guy, he’s just under mind control. Susan, the super hero, is able to break the emotional barrier even if Jessica Alba, the actress, isn’t. And by the way, composer John Ottoman adds yet another boring music score to his resume.

Did I really care for any of this? Not really. This movie is dumb and mildly entertaining. Yet it acheives a major feat: it’s a definite step up from the first film. It’s towards the bottom of the barrel when it comes to comic book flicks (although I’ve never seen the craptistic "Daredevil," "Elektra" or "Ghost Rider"). It’s too bad that "Knocked Up" is rated R, because I’d recommend dragging the kids to see that instead of the kids dragging you to see this. GRADE: C

Hello there! Quick question that's entirely off topic.
Do you know how to make your site mobile friendly?

My weblog looks weird when browsing from my iphone 4.
I'm trying to find a theme or plugin that might
be able to resolve this issue. If you have any recommendations, please share.
Thanks!

Here is my webpage - bodybuilding nutrition