The French Connection: “Paris, je t'aime” is a Sweet, Fun Ode to the City of Lights 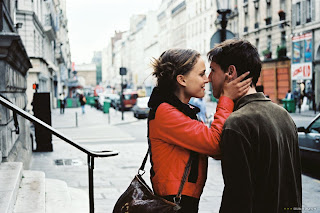 “Paris, je t’aime” is a collection of shorts from American directors like the Coen Brothers, Gus Van Sant and Alexander Payne, German director Tom Tykwer, Mexican director Alfonso Cuarón and even Frenchmen Gérard Depardieu! The concept has come from producers Emmanuel Benbihy and Tristan Carné. A total of twenty-one completely various directors have come together with actors of nearly every ethnicity in eighteen stories of love and loss set in Paris, France. While some films are forgettable, most are charming and fun.

The films do range from hysterical, delightful, sweet, original, to plain, ordinary and downright bizarre. But it’s always a fascinating watch. And the best part is that if you’re watching a film that is less than interesting a new one is going to start in 5 minutes time. It’s like speed dating for film fanatics. The shorts all range in technical style but they remain visually similar. You can tell they are all part of the same collective work. Some are funny, some are sad, most are in the very least watchable. It’s hard to tell what exactly the film as a whole is really saying besides that Paris can work wonders on people. The city has a strange quality that can help mimes fall in love or cause trouble for American tourist Steve Buscemi while waiting for a train.

Alexander Payne’s (“Election,” “Sideways”) was probably my favorite. He’s terrific at telling great stories with lonley yet realistic people. Take “About Schmidt”, for instance. That film had a very slow, unappealing look which was a relfection of how the characters felt. Jack Nicholson was a lost soul and it was the magic of Payne’s deliberate direction that made it so successful. And one of the reasons his short works so well is due to where it’s placed in relation to all the other shorts. By the time this film is shown we’ve heard beautiful spot-on French accents and here we’re given an American woman voiceover in a God-awful French dialect that is an insult to anyone who speaks French. This story of a lonely American tourist works on every level.

The most interesting short stylistically was Vincenzo Natali’s romantic and scary vampire film starring Elijah Wood. It was sort of “An American Werewolf in Paris” meets “Interview with the Vampire.” Wood is an American tourist who falls in love with a beautiful vampire. The blood here has a gorgeous red-orange hue that reminded me of the colorful blood found in “Sin City.” A visual delight.

Gus Van Sant takes a different turn by presenting us a possible love between two young men. A young Frenchman (young Hannibal Lector in the god awful “Hannibal Rising”) presents a long monologue to another young man who seems either disinterested or so fascinated by what this man is saying that he remains speechless. That is until we realize that the young man doesn’t speak a word of French…

Wes Craven has proved before that he can make movies that aren’t scary. Unless you count Gloria Estefan’s acting in his “Music of the Heart.” This film isn’t in the horror genre but it does have an interesting spiritual element. (Including a cameo of Alexander Payne as the ghost of Oscar Wilde) His film also probably has one of the most satisfying endings. Many of the films end abruptly, prompting me to shrug my head and think, “Okay I guess that one’s over.”

“Run Lola Run” director Tom Tykwer loves playing with time. He shows a complete romance in time-lapse photography and he features a great performance from Natalie Portman. She has one of the best lines in the entire film. She plays an American actress in Paris shooting what sounds like a horrible movie: “I play a prostitute that is kidnapped and held prisoner by her pimp. He beats her and rapes her. But they eventually end up getting married.” If that doesn’t sound like a winner I don’t know what does.

There are a few films that don’t entirely succeed, but that’s okay. There are so many films here that the bad ones just kind of leave the mind and then there’s plenty of room to remember the great ones. So grab some French fries and fall in love with this film already! GRADE: B

Although Rolex has been producing chronographs since at least the thirties, the replica watches history can actually be traced back to the fifties, when Rolex made a few chronographs which they at times rather unimaginatively titled. Rolex appears to hublot replica really want you to know much about these ousted models not one tag heuer replica chronograph is in their otherwise really quite detailed history page, nor is one in their fake rolex sale more detailed history page on their press only site. If you had the gold one it just meant you had more money to spend on it, but in replica watches sale enthusiast circles rocking a steel one to this day means you likely dedicated a lot of effort in hunting one of these down if it were to come from authorized sources. Because this does happen for a few logical reasons but their cumulative effect on the steel Daytona ownership experience are very much relevant here.

Thank you for your sharing. Thanks to this article I can learn more things. Expand your knowledge and abilities. Actually the article is very practical. Thank you!