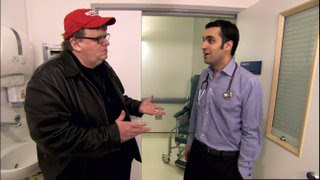 It’ll make you laugh! It’ll make you cry! It’ll make you want to move to France! Michael Moore’s brilliant healthcare documentary “Sicko” even paints a realistic and positive view of Cuba to the dismay of Republicans everywhere. It may be the home of a hated dictator but it’s home to one of the best (supposedly) health care systems in the world. The U.S. is always bragging about being number one at this and at that, but how about the way our insurance companies treat their paying customers? We live in a country where hospitals reject us if we don’t have the right insurance card and doctors refuse treatment because we can’t afford it. They even let patients die because procedures, that are done everyday, are too “experimental.”

Moore’s film, while blatantly liberal-minded as always, does a wonderful job at being basically bipartisan. (except for the goofy shots of George W. Bush) This film isn’t really an attack at one person (such as the head of a corporation or the Head of State) but it does attack an industry that is supposed to be caring for the people of the United States of America. While there are millions of people with health insurance, many of us will come across a situation in which we need medical assistance and we’ll simply be passed by even if we’re supposedly covered. That’s us, the good old U.S. of A.

While many will find Moore himself to be a cloying, manipulative man, there is one thing he is certainly guilty of: making extremely engaging (whether you agree or not), entertaining movies. This guy has taking several moderately interesting subjects and turned them into enjoyable experiences. I mean I’m the last one that would line up for a documentary about our health care system, but Moore cuts together so much fun stock footage along with all of his interviews with interesting people and turns it into a masterpiece of non-fiction cinema. There are parts that are just fall down funny that are too good to spoil here. He understands that laughter is a universal language. Hopefully his humor will bring people of differently political sides together (then again this is America). And then there are the parts that will anger you and make you shed tears. Moore makes some strong statements that are sure to get people riled up as usual. And some might disagree with how non-fiction this all is.

Moore deliberately makes the case that while in the US there are medical miracles happening everyday, there are still thousands of cases of people being denied medical help for the stupidest reasons. He uses so many examples it’s impossible to note them all. One 22 year old woman was diagnosed with cervical cancer and her insurance company told her she was “too young” to have cervical cancer and promptly denied her coverage. A Black man was refused a bone marrow transplant because the procedure was deemed to “experimental.” He later died because of his ailments and his wife gives a powerful, emotionally devastating testimonial. Another case that was shocking involved a young mother whose infant came down with a terrible fever one night. The hospital she was at didn’t accept her insurance and by the time she was able to be transferred to another hospital her baby succumbed to her illness. A similar case occurred overseas and the hospital promptly treated the baby, saving its life. Why is it in America if you don’t have the right form, income or insurance card are you denied help?

Moore disagrees with the US health system and praises the likes of Canada, France and even Cuba(!?) as having successful “socialist” (yikes!) national healthcare (most of which is shockingly FREE). He insists that if we had a national health system most of us would be better off. But that would mean the rich paying more taxes so that everyone (including the poor) would get free healthcare. Who would want to pay more taxes? And who would want to (sometimes) wait months for free healthcare? Moore presents his arguments and it’s hard not to agree with most of them, but there will plenty who will be irked at the sight of Moore paying tribute to Joseph Stalin’s memorial. I’m surprised he hasn’t been blacklisted yet.

Speaking liberally for a moment, I’m guessing our government doesn’t want to fund a national healthcare because we’re spending billions funding a war that shouldn’t have begun in the first place. The point is everyone deserves equal healthcare whether you’re rich or poor, black or white, conservative or liberal. This is a film that could help to start to close the gap of blue vs. red that is dividing this great, but flawed, nation. GRADE: A-