Down With the Sickness: “28 Weeks Later” is an Infectiously Good Sequel 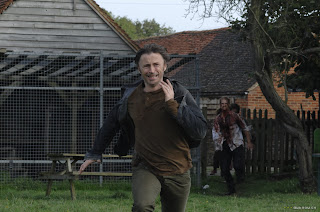 “28 Days Later” scared the crap out of me. I’m sure it scared the crap out of you. It was one of those great scary movies that come along every few years and just blow you away. Last year’s was the British import “The Descent.” Remind me not to go cave diving anytime soon. It seems nearly impossible to make a successful horror sequel from such an outstanding first start. (Does the God-awful “Blair Witch 2” ring a bell?) Bigger doesn’t automatically mean better, but “28 Weeks Later” is a gloriously entertaining follow-up that is every bit as intelligent and frightening as it’s predecessor.

Sometimes sequels with a clean slate of characters and crewmembers just don’t work. I’d love to say that’s why “The Birds II: Land’s End” wasn’t successful but that figuring out that mess could take 28 weeks time. I was worried that Jim, Selena and little Hannah weren’t around. By the end of the first film, you felt as if you were experiencing the horrifically disastrous apocalypse with them. And besides isn’t the cardinal rule to continue a horror sequel with the previous film’s survivors? Not in this case, but it turns out to be a good thing.

New director Juan Carlos Fresnadillo has made his film similarly to Danny Boyle’s without just ripping off his style (the film is also shot mostly on Digital Video). It feels as if Boyle could perhaps be behind the camera, but alas his only credit here is as executive producer. At least we don’t get an overwhelmingly dark and crazy third act, although I’d have to say the ending here is in the least…bleak. Our new characters consist of Don (The Full Monty’s Robert Carlyle) who escapes the intense precredit sequence without his wife, because the guy LEFT HER BEHIND. How fascinating to start a movie with a cowardly hero! Let’s thank the brave writers Rowan Joffe, Jesús Olmo and Fresnadillo.

After nearly 6 months, the infection (which consists of the “rage” virus that turns bitten humans into ravaging, blood-vomiting lunatics) that has nearly wiped out England has been abolished (And by abolished I mean it’s going to come back in the second act). Don is able to return to what’s left of society and is reunited with his children Tammy (Imogen Poots) and Andy (Mackintosh Muggleton). The United States Army is in charged of helping the Englanders’ reenter civilization. They are taking no chances and have severely guarded an enclosed area. The outside areas still have rotting corpses all over the place. Leave it to the US to help rebuild a society torn apart by malevolent forces (you see what I’m getting at here or what?) And as it turns out, Tammy and Andy’s mommy (Catherine McCormack) survived the opening sequence but she somehow carries the “rage” virus but doesn’t show any outward symptoms. Perhaps a cure is in order.

I think you can pretty much guess what happens next, so I won’t spoil the fun. If you’re willing to buy how the outbreak begins again then you’ll have lots of fun and you’re bound to jump out of your seat at least a few times. The characters here are just as interesting as the previous film’s and they’re likable including Army nurse Scarlet (Rose Byrne) and US soldier Doyle (Jeremy Renner). I guess the exception here would be jerk soldier Flynn played by Lost’s Harold Perrineau; just because he got off the island is no reason to be all cocky. Fresnadillo has presented some really suspenseful sequences including one that is seen nearly entirely through a night vision lens.

“28 Weeks Later” is a fully competent, enjoyable follow up to 2003’s fantastic “28 Days Later.” It has just as much suspense and surprise, and like all sequels it’s all pumped up. It’s certainly gorier, so the weak stomached might want to skip the big meal before seeing it. I’m not sure a third film could be made successfully (28 Months Later?) because that would just seem like overkill, but when smart sequels like this are produced who knows what number three could bring. GRADE: B+

Appreciate this post. Let me try it out.
Review my webpage ... teenpornsexpussy.com

Hi there, You have done a fantastic job. I'll certainly digg it and personally suggest to my friends. I am sure they'll be benefited from this web
site.
My web page - Student strips down and dance

Hey! I could have sworn I've been to this site before but after reading through some of the post I realized it's
new to me. Nonetheless, I'm definitely glad I found it and I'll be
bookmarking and checking back frequently!
Also see my page > Blackberry Security

I got this website from my friend who informed me concerning this website and
at the moment this time I am browsing this site and reading very informative posts at this place.
Feel free to visit my web site ... pompe funebri roma

Wow, marvelous blog layout! How long have you been blogging for?

you made blogging look easy. The overall look of your site is wonderful, as well
as the content!
Here is my webpage :: Newscaller Radio

This is really interesting, You are a very skilled blogger.

I've joined your feed and look forward to seeking more of your fantastic post. Also, I've shared
your web site in my social networks!
My homepage ... cheap iPhone 5 for sale online

You have made some good points there. I looked on the internet for more info about the issue and found
most individuals will go along with your views on
this site.

I know this web site provides quality depending content and extra
material, is there any other web site which provides such information in quality?

Attractive section of content. I just stumbled upon your site and in
accession capital to assert that I acquire in fact enjoyed account your
blog posts. Anyway I will be subscribing to your feeds and even I achievement you
access consistently quickly.

Asking questions are really good thing if you are not understanding something totally,
however this piece of writing gives fastidious understanding
yet.