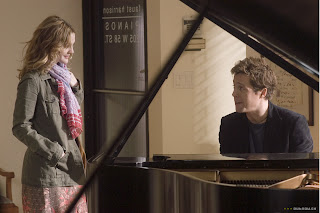 I find myself indulging way too much on VH1’s popular “I love the (insert decade here)” series. My favorite is the ‘80s with such classical pop culture references as Cabbage Patch Dolls, The Breakfast Club and Wham! When the film “Music & Lyrics” opens with a horrendously cheesy ‘80s music video by fictional pop group Pop! the nostalgia bus hit me. Okay, so maybe I was only 6 when Milli Vanilli lip-synced their way to a Grammy Award, but I love all things 80s. Then the film introduces washed up Pop! has been Alex Fletcher (Hugh Grant) and we never get to see the 80s again! The film would rather be a typical romantic comedy than a skewering of everyone’s favorite bad-hair decade.

This is definitely an above average romantic comedy, but it doesn’t come close to capturing the comedy of Drew Barrymore’s last romantic romp Fever Pitch. Writer/director Marc Lawrence assures us there’s no question that Barrymore and Grant will get together, with bumps along the way, but there’s a mildly engaging time to had here. Sophie Fisher comes into Alex’s apartment to take care of his plants. And while Alex is having a little bit of songwriter’s block, it just so happens that Sophie is a gifted writer. If Alex can write a hit song for Cora a Shakira-like pop singer then he’ll surely be superstar again.

So Alex and Sophie become writing partners. He writes the music and she writes the lyrics. And wouldn’t you know that these two might just hit it off in the love department. Sophie has some odd quirks, which Barrymore handles well. She pricks her finger on a cactus and promptly exits Alex’ apartment before it gets infected. It’s kind of difficult to see how Alex was ever such a huge star, but we just have to accept it.

A romantic comedy works only as well as the two lead work together. Does the audience actually want to see the two get together? Do they make a good couple? Are they worth rooting for? The answer here is yes but their romantic journey isn’t without it’s lulls. There are many scenes that just sort of hang there with no real direction. Some of their scenes in which they try to sort out their music are just kind of boring. There are laughs to be had, but it’s not really a laughfest.

Most comedies like this reveal in funny, entertaining secondary characters. Here we have some TV veterans in on the fun. Brad Garrett, of Everybody Loves Raymond fame, plays Alex’s manager and he has a good goofy quality that works, but doesn’t necessarily make him funny. The standout here is Kristen Johnston of 3rd Rock From the Sun who plays Sophie’s sister. As Rhonda, a married woman with kids who never lost that Pop! crush she has such an unfeminine way about here that completely works in her favor. Her shouting, “Gary I’m going out!” after learning she has a chance to see her favorite Pop! star in person (while in unfocused background) is the film’s funniest throwaway line.

Music & Lyrics isn’t without some issues, but anyone in the mood for a light romantic romp should be please. It’s not total garbage, yet not a complete success. While I’m sure many would find it a waste of time, I found enough about it to be charmed by it all. GRADE: B-

Article extraordinary interest, may be useful for many people