Battle of the Bulges: “300” Is Neither Style Nor Substance 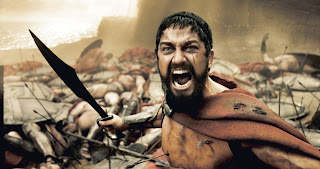 I never thought a film could make me pine for the cheesiness that is "Troy," the Spartan vs. Trojan epic that many thought of as nothing more than a "Gladiator" rip-off. Not to mention a poor adaptation of The Illiad that made no attempt to be original or intelligent. It had laughable throwaway lines like Brad Pitt shouting, “Do you know what's waiting beyond that beach? Immortality! Take it! It's yours!” Even though the whole thing was basically a mess of a film, it was entertaining. The latest sword & sandal flick to hit the big screen, “300” tries way too hard to entertain it’s target audience of 15 year old boys.

I enjoyed director Zack Snyder’s “Dawn of the Dead” remake a lot if not more than the original. That was a film updated for today’s MTV “I need an edit every other second” generation type of moviegoers. And frankly, sometimes I’m one of them. While it was definitely quicker paced than the 1978 version, it stood out besides the fact that it was all hip and cool. Now we have “300” which is supposed to be a hybrid of the Gladiator-esque epic and Sin City-esque coolness. It’s really neither. The “style” (scenes shot in front of green screen with the computer effects placed later) wears thin after ten minutes. And frankly the palette here is just ugly. The washed out colors are supposed to look old and vintage, but are just bland.

The film is based on Frank Miller’s comic…err, graphic novel of the same name. It follows the true story of King Leonidas (Gerard Butler, or as some may end up calling him, Butt-ler) and his army of 300 burly Spartans, who have more six packs than a frat party. They end up being outnumbered in the ensuing Battle of Thermopylae (in 480 B.C. for those historians who care). Their numbers are low, but their spirits are high. Barf. This is as inspirational as a high school football game in Texas. Then there is the enemy Persian leader (Rodrigo Santoro) who looks like RuPaul with bling. Let’s not forget the Frank Miller essential “creatures” including Ephialtes (Andrew Tiernan), looking like the love child of Gollum and The Goonies’ Sloth, who will eventually betray the Spartan army.

As “original” as the film is trying to be, it ultimately isn’t. The soundtrack didn’t have any oomph and I’m getting sick of the typical female vocalist whining on the soundtrack. What about family members of the hero running through wheat fields? Got it. Or how about shots of thousands of arrows coming toward the camera? Been there, done that. And whoever thinks this film is violent obviously has never seen a Road Runner & Wile E. Coyote cartoon. A child is more likely become a serial murderer from watching Saturday morning cartoons than from watching this.

It’s really just a geek show. Let’s just say “300” won’t make any converts of non graphic novel fans. I know there are plenty of people who will love this movie, I’m not one of them and that’s okay. I just felt that I didn’t get to know any of the characters particularly well, so did I even care if any of them get killed?* It got annoying watching inspirational speech, battle, speech, battle, and speech for two hours in dreary colors. This is a testosterone-filled, emotionally empty movie of mind numbing special effect shots that aren’t very impressive in the first place. GRADE: C

*I realize I may sound like a hypocrite since I enjoy slasher films that don’t exactly rely on three dimensional character development, but I digress.