Emotion Picture: “Be Kind Rewind” is a Kind & Enjoyable Fable 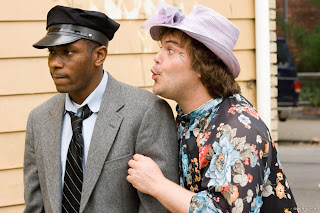 “Be Kind Rewind” is the kind of movie made for people who love movies. If you’re the type who goes to the theatre once a year to see the latest Hollywood blockbuster, steer clear. But if you’re the type who can play movie trivia games and quote your favorite lines and spend most of your time going to, renting or watching movies, then Be Kind Rewind was just made for you. And I found it particularly enjoyable. Jack Black isn’t one of my favorite actors, but he’s finding roles that suit him without making him irritating. Wild directing auteur Michel Gondry who made the fantastically bizarre Eternal Sunshine of the Spotless Mind, finds a comfort level here in “Rewind” which shows his loves of movies and characters who love movies as well.

The story takes place in an urban area of New Jersey. A local video store called Be Kind Rewind has probably 50 VHS tapes in stock to rent. The rentals cost a whole dollar. The store is straight out of “Little Shop of Horrors” (without the horrors of course). Much like Mr. Mushnik’s flower shop, it’s a wonder how the business is still in operation. Especially with West Coast Video (think Blockbuster) in serious competition just a stone throw away. And then actually rent out DVDs and have more than one copy of a movie. Be Kind Rewind owner Mr. Fletcher (Danny Glover) goes on a mission to uncover West Coast Video’s secrets and puts his number one employee (his only employee?) Mike (Mos Def ) in charge. Meanwhile, Mike’s friend Jerry (Jack Black), gets electrocuted and ends up being magnetized. And what happened when you run a magnet over a VHS tape? Erasure.

Before they know it, ever tape in the store has been erased and Mike is placed in a scary predicament. When his boss returns he’ll not only be out of a job, but the store will no doubt be “relocated” due to a new development willing to buy out and move the rundown rental place to another location. So in a moment of desperation, when number one customer Miss Falewicz (Mia Farrow) wants to rent ‘Ghostbusters,’ they decide to shoot their own version (with the help of a local stranger Alma played by Melonie Diaz who is very good and natural) and pass it off as the real movie. Their logic? Well if she’s never seen the movie, how would she ever know the difference? Uh, maybe because she’s human and can see and hear. If you can buy the premise, you’ll be golden. What begins is a phenomenon. The customers are actually enjoying watching their favorite movies being “Sweded” the name given to the Be Kind Rewind staff’s version of the movies. Jerry is signing autographs and business has never been better. They reenact everything from “2001 A Space Odyssey” to “The Lion King.”

What is so enjoyable about the film is that it takes a standard plot; low-income business must face adversity in the form of corporate conglomerates and puts a fresh new spin on it thanks to the wild and creative imagination of one Michel Gondry. Some people are insisting the film is to “weird” to be liked but I never really found anything to weird about it. It’s different yes, but nothing wildly “out there.” The acting is good and the creative ways they go about shooting the films is beyond genius. If anything, what they do stretches character credibility. You’ll be asking, could these people really come up with that? But beyond that it’s fun to see where the film goes and how it gets there. And surprisingly the film has a lot of heart and is very good-natured.

The whole film has a fable vibe to it without really seeming too whimsical. The shots are simple but imaginative and you can see the amount of heart that was put into the film. This is a small little film that was made for people who love movies. It may not stand the test of time and you even forget it exists years down the line, but it’s a movie that’s worth seeking out because it feels like a film made just for you. GRADE: B+