The Joy of Speck: “Horton Hears a Who!” is an Appealing Cartoon That Feels Fresh and New 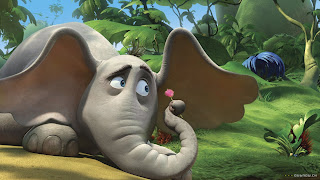 While I didn’t really want to see this film I knew that I should, and wouldn’t you know I thought it was quite good. Jim Carrey voices Horton an elephant of some size, he does a great job he should get a prize. Steve Carell is the Mayer of Whoville a land full of Whos, they are all exciting people who won’t make you snooze. This world of Whos is the size of speck and all of sudden Horton hears it and says “What the heck?” Horton begins to communicate with the tiny little spot, all his jungle friends thinks he’s crazy and probably on pot. Horton’s main rivalry is found in Kangaroo voiced by Carol Burnett, and she wants the speck destroyed so she hires a vulture played by Will Arnett. So Horton must make sure this dot doesn’t get into the wrong hands, although that pesky Kangaroo has some nasty other plans. I won’t spoil the ending for those who haven’t seen it, I’m sure this family friendly adventure will be a box office hit.

Phew! Pardon my rhymes but I felt that was only appropriate considering the film is based on the classic Dr. Seuss book “Horton Hears a Who!” I must say I was quite surprised to find the film rather enjoyable. The animation was colorful and eye-catching and the actors’ voice work was great. Horton was a little Jim Carrey “animated” in the way the actor is always practically bouncing off the walls, but it fit with the film’s fast pace (which included a bizarre anime spoof sequence). And Carol Burnett simply shines as Kangaroo who simply insists that a little speck couldn’t possibly contain an entire world of life. She gathers up nearly the entire jungle of animals and turns them against Horton, which sort of reminded me of “The Mist” in which Marcia Gay Harden’s religious freak character turns her followers against the non-religious folk.

As for Whoville, I’m sure most Seuss fans will be pleased that this place simply screams Dr. Seuss. I’m sure if the Doc were around today he would certainly approve. And if this movie proves one thing, it’s that Dr. Seuss movies can exist and be successful, but only in animated form. Films like “The Grinch” and “The Cat in the Hat” simply don’t work because Seuss’ creations belong in cartoon form. As the mayor of Whoville Steve Carrel is great. And Amy Poehler is enjoyable as his devoted but skeptical wife.

I was actually impressed at the level of suspense that is actually created. The entire jungle believes that Horton is crazy so they all want to take this speck, with they don’t believe could house life, and destroy it. This would naturally render everyone in Whoville completely and utterly dead. Horton must fight against the majority and stick up for what he knows is true. And that’s a strong theme to have in a supposed “kid flick” with a G rating. If anything, I felt the film sort of had too endings. The story seems to be coming to its close but then continues on, but it really never seems to drag so it’s not all bad ( I mean the movie’s less than 90 minutes anyways).

“Horton Hears a Who” is simply an enjoyable movie for all ages. It has bright and colorful animation and equally colorful and lovable characters (how about that wacky Katie, is she on crack or what??). Whether you have kids or not check out “Horton,” it’s a family flick that is stupendously fun. GRADE: B

Pretty great post. I just stumbled upon your blog
and wanted to say that I've truly enjoyed browsing your blog
posts. After all I will be subscribing to your rss feed and I am hoping you write again soon!

Hey I know this is off topic but I was wondering if you knew of any widgets I could add
to my blog that automatically tweet my newest
twitter updates. I've been looking for a plug-in like this for quite
some time and was hoping maybe you would have some experience with something like this.
Please let me know if you run into anything. I truly
enjoy reading your blog and I look forward to
your new updates.