Stayin’ Alive: “Funny Games” Dares the Audience to Be Revolted: How Charming! 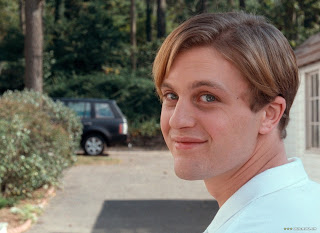 Let’s get this out of the way first. I love this movie. I love everything about it. That doesn’t make me a repulsive human being. But it does make me human. I don’t love the movie because I enjoy watching people being tortured (although I admit that was me watching “Hostel” and it’s sequel in the theatre). I think that is what the film’s most avid critics are confused about I love this movie because of how it uses film to a) create a dialogue amongst viewers b) manipulates the audience who are seasoned to the clichés of cinema and c) how a remake can actually be just as well received as the original film. That being said, I do not recommend this movie to everyone. If you went to film school, or love seeing every type of movie, or aren’t easily offended then please check this out. If you only care about watching movies with your favorite pop star or boy wizard I advise you to stay away. In fact, be afraid, be very afraid.

“Funny Games,” which is a remake of the 1997 Austrian film of the same name is about an upper class family that is the unfortunate victim of a brutal home invasion in their lake house. Two preppy young lads (who insist on being polite and mannerly) take the family hostage and force them to play torturous mind games in which they bet that the three family members (a couple and their young son) will be dead by morning. Naomi Watts and Tim Roth (both likable) are the couple and Devon Gearhart is the child. Bradley Corbet and Michael Pitt (both disturbing) are the psychos. This is a shot for shot remake of the Austrian version and the same director (Michael Haneke) has returned. They are pretty much the exact same film. What you get in the first film is what you get in the remake. And this is fine by me because this film will reach a wider audience than the original, although due to its subject matter, I doubt it will hardly make a dent at the box office. And you know, that’s ok because I would be seriously disturbed if this movie actually made more than 20 million dollars.

What’s so great about Funny Games, a film that is extremely stylized, is it’s a prime example of the director being in complete and utter control. He makes choices that you wont see in other films including one character who actually addresses the audience. He knows we are watching a film and Haneke plays with that. These poor people are not the only ones being played with. Haneke teases us and tortures us the viewers as well. Maybe not physically, but he knows what we should expect and he goes against that. He cuts away from the violence, forcing us to hear it instead. He also employs some extremely long takes, at which some viewers just may decide they've had enough. He even goes as far as rewinding the film and causing a major plot development (which the audience would want) to be avoided. He wants the audience to be shocked and he succeeds, and I admire him for it. In fact, the film is so stylized in its brutality and psychological abuse that it’s almost lyric and so vulgar as to be nearly comical. But at the same time he creates unbelievable tension in the viewer. Your heart will pound and you’ll sit motionless in your seat for very longs stretches. And then there will be points when you look at your watch waiting, practically begging for SOMETHING to happen.

This is a film that facilitates and requires discussion afterwards. In fact, a total stranger asked me how I felt about the film. When I told the guy that I enjoyed the film, although I had pretty much watched the exact same thing two days prior, he was surprised to A) find out it was a remake and B) that I loved it. He enjoyed it as well. He enjoyed it not on the same level as one would enjoy say “Ratatouille” but on another level completely. It’s a fun movie to talk about, dissect and criticize and the director almost dares you to enjoy it. He wants you to feel dirty and vile if you even remotely find it entertaining. (since he is ultimately commenting on violence being a sick form of entertainment) But watching people be physically and mentally abused isn’t something that should be fun, but he insists that’s why we go to the movies in the first place: to experience something you can’t experience in your real, mundane life. That’s why pornography exists. That’s why prositution exists. That’s why the entire Internet was created! It's sad but true.

This is probably one of the best remakes simply because it actually makes it available to an American audience. The acting, writing and direction are pretty much equal, except we don’t have to keep reading all the time! This sort of makes an argument about how a remake can actually be a good thing. If a foreign director makes a movie in another country where no American has seen it, why not remake it with American actors? The original Funny Games is not a popular movie like “Psycho,” so a shot for shot remake almost makes sense. He’s not remaking his own film because it was bad, he simply wants to show it off to a new wave of people. And is wanting your film to be seen really such a bad thing? And the film was pretty much perfect as it was so there’s no need to change anything. Because this film was made with American money doesn’t make the ending different. Unlike the similar film The Vanishing. The director took his own disturbing film and made it with American actors and completely changed this own vision to fit the generic taste of the Hollywood audience. Nothing is more disturbing than that. I’m glad Haneke stuck with his original script because it wouldn’t work if it had a happy ending. This is not a happy movie. I would compare it to the likes of Hard Candy (because it’s what you don’t see that’s scary) or Natural Born Killers (because that was also a violent movie that was about violence) and even A Clockwork Orange (which still disturbs viewers nearly forty years later). Kubrick made movies to provoke and disturb and when his movie came out everyone thought it was repulsive and now it’s a classic.

So that raises the question? Am I a psychopath for actually enjoying this movie? No. I didn’t enjoy this movie to point where I was applauding the deaths of people in the way you would in say, a “Friday the 13th” movie, I enjoyed this movie simply because it was so weird and different from the movies that it’s commenting on. If you’re the one who watches every “Saw” movie and nothing else, then you’ll hate this. If you don’t see every “Saw” movie and only see whatever Julia Roberts makes, then you’ll hate this. But if you like watching ALL kinds of movies disturbing or not and nothing really offends you, then you’ll enjoy this. Because to like this movie isn’t to like what goes on in the story but how the plot is affected by the director’s sleight of hand. It plays with movie conventions and flips them around. It’s not afraid to cause such a wide range of emotions in the viewer and it’s not afraid to manipulate the audience in a way that actually may make them walk out of the theatre. (In fact Haneke himself has said that if you stay to watch the whole thing, you have failed “the test” but if you walk out disgusted you “pass.”) If you’re willing to sit through more of a moral exercise than an actual motion picture, you will have a lot to gain from (and a lot to talk about) watching “Funny Games.” GRADE: A-