Vine Intervention: “The Ruins” is a Good Enough Way to Pass an Afternoon 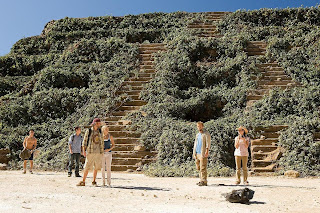 If you’ve seen one of them, you’ve seen them all. I’m talking about the type of movie where a bunch of young Americans who vacation in a foreign country who end up…hmmm dead? If you can get past the dreadful and clichéd opening scenes of “The Ruins” you’ll be pleased to find out that the rest of this blood fest is actually quit chilling and enjoyable. Based on the book, which is sort of Steven King lite, The Ruins is sort of like “Turistas” with a supernatural twist, except that it’s much better than you’d think. And thank god there is no exposition because when it comes to films like this, frankly I don’t give a damn.

If you’re wondering what exactly is after these twentysomethings (which include Jena Malone, Jonathan Tucker, Laura Ramsey and Shawn Ashmore) let me just tell you right up front (SPOILER) that it’s killer plants. Yes I said killer plants. And you know what? “The Ruins” is the “Gone with the Wind” of killer plant movies. Of course, “Little Shop of Horrors” remains the “Citizen Kane” of killer plant movies. These four young things, while vacationing somewhere in Mexico, decide to explore some ancient ruins with their new German friend played by Across the Universe’s Joe Anderson. Before you know it, they are being quarantined on the ruins by a modern tribe who have bows and arrows AND automatic weapons. They can either try to make a run for it, or wait it out and hope that someone comes searching for them. In the meantime, they notice the local flora isn’t exactly friendly.

Like I said if you can sort of buy into the initial lame premise then you might actually get scared every now and then. The story (penned by Scott B Smith, who based it on his novel) is non-existent and the characters are just simply there to be die disgusting deaths, but I was sort of surprised at how invested I was with what was going on. I don’t know if I just liked the actors but I almost sort of felt bad for them. When one girl gets a bad cut on her leg, she wakes up the next morning with a vine attached to the wound. And it’s not just attached; it’s like growing inside her. Her boyfriend immediately yanks it out and it’s surprisingly gruesome. There are some ghastly images here (amputation anyone?) and yet there’s no scary dude with a mask, so it’s all good.
Mock me if you want, but I found the later half of The Ruins to be an enjoyable freaky ride. It may not be the most original horror flick, but if you sick of the standard slasher movie or so called “torture porn” movies, then you might as well do yourself a favor and check out “The Ruins” if only so you can say you saw that movie with the killer vines… I can’t believe I just wrote that sentence. Oh well. GRADE: B-