Veteran’s Daze: “Stop-Loss” is a Powerful Look at Our Unending War 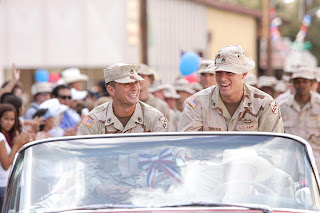 It’s been over five years since our president declared war on the country of Iraq. It’s been a costly effort and many people, liberals and even some conservatives, are wondering what it’s all been for. If you're looking for an anti-war tale about WHY “Operation Iraqi Freedom” was started in the first place then the film “Stop-Loss” will disappoint. You’re probably better off seeing one of the many movies nominated this year for Best Documentary at the Oscars. However, “Stop-Loss,” Kimberly Peirce’s follow up to her emotionally draining debut “Boys Don’t Cry,” is a powerful essay on the effects of war on the men who give their hearts, minds and bodies for our country. While many soldiers have the good fortune to come back home physically unharmed, sometimes you can’t vouch for their mental and emotional health. “Stop-Loss” takes a look at a handful of soldiers returning to their hometown and toll the war on terror takes on them.

Ryan Phillippe, who started his career in teen films like "Cruel Intentions" and "I Know What You Did Last Summer," has certainly come a long way. He has matured into a very capable and appealing actor who has chosen interesting and challenging roles. His turn as a nice cop gone racist in "Crash" really opened many people's eyes that this guy means business, as he does here as Sgt. Brandon King. The film opens with some harrowing footage of soldiers fighting in Iraq. King is joined by Tommy Burgess (Joseph Gordon-Levitt) and Steve Shriver (Channing Tatum). This opening sequence is one of the better and intense war sequences in modern film. Although many see the opening of “Saving Private Ryan” as the cinematic equivalent of hell on Earth, one could make a strong argument that “Stop-Loss” paints an equally devastating picture.

Soon these soldiers’ tours of duty are over and it’s back to their hometown in their patriotic state of Texas. At first all appears normal. These soldiers are excited to see their family, friends and loved ones. Shriver can’t wait to see his girlfriend. Burgess can’t wait to see his wife. That is until these guys, who are borderline psychologically damaged from military combat, begin to have some serious delusions. Shriver digs a pit in his own front yard and sleeps in it as if he were out in the bush. Burgess is a depressed alcoholic who can’t make his relationship work. And one soldier who lost both legs and an arm is the positive one, recouping in an Army hospital somwhere stateside. And if all that isn’t bad enough Lt. King has become stop-lossed. That is, he gets officially ordered back to Iraq even though he served out his contract. He did his duty and it’s time to be home. He doesn’t want to go back, and he won’t without a fight.

“Stop-Loss" takes a good hard look at a subject that is very difficult for some to deal with and makes it fascinating. We, as Americans, hear about the never-ending war almost on a daily basis. We’ve lived with it for over five years and it’s a part of our lives. And to think that someone is being forced back into serving their country (someone who volunteered in the first place) just seems wrong. King feels he has nowhere to turn except for a senator in D.C. who might be sympathetic to his plight so he takes to the road with Shriver’s girlfriend (Abbie Cornish).

Peirce’s writing almost oozes with preachy opinions, but it’s the actors who really sell this stuff. We’re immediately drawn to King’s dilemma because there’s really nothing that he can do, and yet it’s captivating to see him try. He also has become mentally unstable which is devastating in a scene in which he treats some simple muggers like Iraqi POWs. Peirce crafts an intriguing and sympathetic story about the men who fight for our country without ever really pissing off either end of the political spectrum. Sure you can see how she feels about this war but it's this specific military policy, which has apparently affected thousands of soldiers, that, whether you're for the war or against it, you can’t help but feel it’s a crime against humanity. Patriotism only gets you so far. GRADE: A-


Note: Don't let the film's "let's-market-this-to-fifteen-year-old-girls-because-the-guy-from-Step-Up-is-in-it" trailer turn you away. This is a harrowing and tough film that's well worth your time. And doesn't that poster make it looks like Varsity Blues II?

Hello, the whole thing is going fine here and
ofcourse every one is sharing information, that's
actually fine, keep up writing.

If the disease is not treated immediately, then everything will result in harm to the health of the body. Thank you for sharing the information