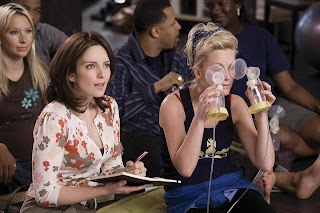 You’d think with last year’s one-two-three punch of "Waitress," "Knocked Up" and "Juno," the whole pregnancy thing would be well-worn territory. But in “Baby Mama” proves that it’s definitely hip to be preggers. This is probably one of the best movies featuring current and former members of Saturday Night Live. This is not “It’s Pat” or “A Night at the Roxbury;” heck it’s not even “Superstar.” This is a well-written and funny account of a woman’s desire to be pregnant and the lengths she’ll go through to reproduce. Tina Fey and Amy Poehler are probably two of the funniest women working in Hollywood these days and this film’s success rests gracefully on their comedic shoulders. And they pull it off with flying colors.

This may not be the movie for everyone. You kind of have to suspend your disbelief just a tad. This isn’t a realistic pregnancy comedy but it certainly knows how to be funny. Most of the jokes are due to the comic timing of its talented cast. As Kate, Fey completely embodies the typical power woman who has chosen the career over the family life. While she’s not in a relationship, she decides she wants to have a baby. Easy enough right? Not really. She can’t be artificially inseminated because of her T-shaped uterus. And adoption will take too long. She decides that surrogacy is the only thing that will work. She meets Chaffee Bicknell (a hilarious Sigourney Weaver) who is the head of a surrogacy program. From here she meets Angie (Poehler) who decides to carry Kate’s baby. Kate is married to the skuzzy Carl (Dax Shepard) whom she breaks up with. This allows Angie to move in with Kate. Let the funny pregnancy high jinx commence!

Meanwhile we quickly discover that Angie is pretty much a complete slob who insists on eating junkfood and soda while carrying Kate’s child. Kate is a woman who prefers to eat organic, as she’s a VP for a natural food company (her boss is played by a hippie, ponytail sporting Steve Martin). Angie is also not exactly the brightest crayon in the box as Kate soon finds out. But this odd couple quickly bonds and Kate must juggle her work and taking care of her surrogate and even a possible relationship with the owner of a Jamba Juice-type shop (played by Greg Kinnear) with a few twists and turns along the way.

The film works mostly due to the pairing of Fey and Poehler. They are the new odd couple and watching them interact is the best part of the film. Director Michael McCullers (who also penned) really let them let loose here but not in way that lets them over act. They never seem like they’re trying to be funny, they just are. They know how to take funny lines and make them really funny. McCullers is no stranger to comedy himself, having written numerous scripts for SNL and both "Austin Powers" sequels. One could argue that the film’s third half seems more plot heavy and less funny, but that’s not necessarily a bad thing.

"Baby Mama" definitely works because of the talented Tina Fey and Amy Poehler. I could watch them read the phonebook and it would by hilarious. This is a movie that is silly but that’s okay. It may not be as touching or as intelligent as Knocked Up or Juno, but it’s not trying to be. Finally we have a SNL movie (Lorne Michaels produced) that is worthy of the talented people who make us laugh every Saturday night. “Baby Mama” certainly delivers. GRADE: B+

Right now it appears like Expression Engine is the best blogging platform
available right now. (from what I've read) Is that what you're using on your blog?