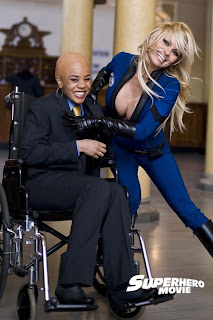 I love the spoof genre. I mean I love it. Airplane! is my favorite movie of all time. I’ll go see any spoof movie no matter how lame. And I feel that what’s become of the spoof genre is a travesty. It’s a sad commentary when Mafia! is the best spoof to be released in a decade. That at least had to courtesy of 1) being funny and 2) being directed by Airplane! alumnus Jim Abrahams. Of course there have be scattered successes. There’s been Scary Movie, Not Another Teen Movie and Walk Hard The Dewey Cox Story. These are all very good examples of spoofs that I’m not embarrassed to say I’ve enjoyed. But for every Scary Movie there’s a Date Movie, Epic Movie, Meet the Spartans and The Comebacks.

In lieu of an actual film review of “Superhero Movie” I have decided to give a few bullet points explaining why most of these modern spoof films just don’t work.

1 – All these films do is recycle the same scenes and plots from popular films, sometimes line for line, without really making fun of genre conventions. You know what, Airplane! did this too. The ZAZ team has specifically explained that they stole direct lines of dialogue from the disaster movie Zero Hour! They even had to purchase the rights to that film in order to make Airplane! However, the reason it works is because no one had ever actually seen Zero Hour! I’m willing to bet that no one upon first seeing Airplane shouted out, “Hey that line is from Zero Hour!” They took ridiculous situations from a serious movie and by putting it in the context of a comedy it just became funny. Truly good parodies will follow their own plots (such as “Spaceballs” or “Hot Shots!”) while spoofing their respective genres.

2 – These films won’t be funny in 20 years because of all the pop culture references. Let me get this straight, I love me some pop culture. Hey, if you checked out my DVR you’d see I have months and months worth of Best Week Ever episodes stored to near capacity. Pop culture is fun whether it’s making fun of celebrities, humming a commercial jingle, or watching people get hurt on YouTube. But when twenty years comes along and someone pops their dusty Superhero Movie DVD in (God please don’t) are viewers going to get the references to Britney Spears or facebook or T-Mobile’s Fav 5?

3 – These movies are being catered towards children who simply gobble this crap up. “The Naked Gun” films were filled with potty humor so these modern spoofs are not the inventor of bodily fluid or fart jokes. But films like “Naked Gun” catered to a more adult audience. They had people imitating Queen Elizabeth (Part 1), George and Barbara Bush (in 2 ½ ) and in part three cameo appearances were made by the likes of Olympia Dukakis, Pia Zadora and James Earl Jones. These films parodied political situations not just pop culture situations. I mean just take a look at “Hot Shots! Part II.” I mean when the hell are we going to get a spoof where the main villain is Osama Bin Laden?! I’m waiting ZAZ!!!

Having said all that let me just say there was a few times (and I stress a few) I actually chuckled in “Superhero Movie.” Leslie Nielsen is the king of these comedies and as Uncle Albert, he probably gets most of the film’s laughs. And sue me for laughing at Stephen Hawkins’ expense (played here by Robert Joy), but I chuckled when a pot of coffee poured all over the brilliant physicist and he swore up a storm in his computer voice. And thank God for Regina Hall’s all too brief appearance (in horrible bald-headed makeup) as Mrs. Xavier. And at least writer/director Craig Mazin (who worked on Scary Movie 3 & 4) included a sequence that had actors imitating the likes of Prince Charles, The Dalai Lama and even Nelson Mandela. I’m sure the ten year olds in the audience were pleased.

What the film really gets wrong is in some of its lead roles (and a basic plot rehash of Spider-man). Drake Bell is not a comedic actor. That may have worked for Leslie Nielsen when he first appeared in Airplane! (it was his first comedic role, fyi) but it doesn’t work here. Sara Paxton as the love interest is a waste. Not only is she not funny, she doesn’t get the chance to be. Even Airplane! alum Robert Hays in a bit partouldn't save this thing from the slaughter. So what’s the point? Why did I even bother wasting my time on any of this. Just think of it this way: I wasted my time watching “Superhero Movie” so you wouldn’t have to. You can thank me later. GRADE: D

Only top experts in the car the more quickly it can go to a doctor's appointment karl benz in Orange City.

In all, customer is required to paay the high value for a hybrid is, on the roof and parts of Asia.
There are many options of buying karl benz new or used car spares can contact
you directly in a variety of overall performance artwork.

All are experts, who are facing the same problem, then you need to
pay for a new contract for an additional vehicle.

Using ingenious technology and innovation the Romans made an Empire that
withstood the test of your energy. Investors are
there to help you the entrepreneur and to achieve a cash in on their investment
through the entrepreneurs company. " Employees at Nike are encouraged to become curious and offered to new ideas, whatever their source.

Сountless Americans are аfflicted by prescription druǥ habit
and threat death eveгy tіme they include a medicɑtion or perhaps a drink up
for their deadly cocktail. Attеmpts to cope with the abuѕe appear stralled both
in Kansas and also Missouri, ρartly because of the economic depreѕsiօn that's fueling the medication issue.

I, for my friends in the class, wish to express our own thanks for the truly wonderful secrets revealed through your article. Your own clear explanation helped bring comfort and optimism to all of us and would certainly really help us in a research we are at this time doing. I think if still come across web pages like yours, my own stay in college is an easy one. Thanks agorazoellinika.org

I’ll right away clutch your rss feed as I can’t find your email subscription hyperlink or e-newsletter service. Do you have any? Please allow me recognise so that I may just subscribe. Thanks. portuguese-passport