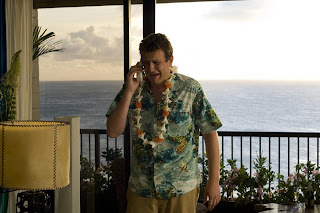 I don’t know whether anyone else has used the term before, but if not, I’m using the term “bromantic comedy” to describe the type of romantic comedy that appeals to guys. You know the type, they were kicked into high gear after Judd Apatow hit it big with “The 40 Year Old Virgin.” These films are popular because they have one of the widest audiences. They have the girls who love the romance and the guys who love the raunchy humor. But these films aren’t just “American Pie” clones. These aren’t just about a bunch of sex-crazed teens with lots of potty jokes. These are about real characters who you can identify with and much more male genitalia than most Hollywood films are used to.

In the latest from uber-producer Apatow, “Forgetting Sarah Marshall” highlights “Knocked Up” co-star Jason Segal as a guy who gets dumped by his TV star girlfriend Sarah Marshall (Veronica Mars’ Kristen Bell). She’s the star of a CSI-type TV drama, which we get to see in some hilarious clips featuring Billy Baldwin in a cameo. Peter (Segal) is the show’s music composer (who has dreams of writing a Dracula rock opera featuring puppets). Apparently Sarah’s been cheating on Peter with dead-brained British rock star Aldous Snow (Russell Brand), and so she wants to break up. Peter is instantly distraught, so he decides to go to Hawaii to forget about her. You couldn’t possibly guess who’s staying at the same hotel.

While “Sarah Marshall” does have some of the same formulaic rules that you’ve seen in past romantic comedies, it never feels like worn out territory. This stuff is brand spanking new. It’s as if this is the first romantic comedy to come along in ages. As written by Segal himself, the script is ever bit as smart and enjoyable as Apatow’s scripts for “Virgin” and “Knocked Up.” There are the trademark Apatow actors who show up in supporting roles including “Superbad” alum Bill Hader as Segal’s best bud Brian, Paul Rudd as a spacey surfer dude, and Jonah Hill as a waiter obsessed with Marshall’s new singing flame. And although the likes of Leslie Mann, Seth Rogen and Michael Cera don’t even show up at all, luckily we get 30 Rock’s Jack McBrayer and Maria Thayer (from “Accepted”) as religious newlywed couple.

We don’t get to see much of Peter’s relationship with Sarah at first, in the opening scene, she break up with him, but not before he drops the towel around his waste and buckles down crying while completely naked. It shows a vulnerability in a male character that you just don’t see very often. So with his Brian’s sound advice, he takes a trip to Hawaii by himself to clear his head. There he meets the lovely receptionist Rachel (Mila Kunis) at a fancy resort that he can’t really afford. When Sarah shows up with her crazy new beau (relatively unknown Brand’s performance here is amazingly hysterical), Rachel feels for him and decides to give him the best suite in the place. He soon spends his evenings balling his eyes out, even after guests complain about a woman crying very loudly.

You can see that there is a slight spark between Peter and Rachel, and there’s a slight hint that maybe Sarah might still have some feelings for Peter, so in all honesty I wasn’t 100 percent sure which way things were going to go. But getting there was definitely so much fun. We get to see little flashes of Peter and Sarah’s relationships that really add to the characters and are done in a unique way. Peter is a sympathetic character, and while Sarah could have easily been labeled the bitchy shrew, she isn’t. She’s not the “bad guy.” This isn’t that type of movie. Segal’s script (and Nicholas Stoller’s Apatow-like direction) treats all its characters equally and let’s everyone have the chance to be funny.

“Forgetting Sarah Marshall” has the distinction of being the best comedy so far this year. (Although that’s really not saying much, so it’s one of the best films so far this year). Guys will like it and girls will like it. This is for everyone who enjoys a great, well-written funny movie that isn’t afraid to show that it has a heart or private parts. This is one bromantic comedy that is truly unforgettable. GRADE: A-