The Great Escape: Everyone’s Favorite Slackers are Back in “Harold & Kumar Escape From Guantanamo Bay” 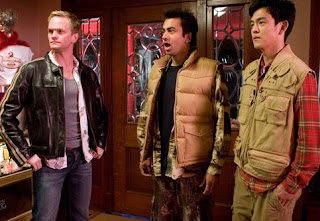 When thinking about “Harold & Kumar Escape From Guantanamo Bay” I’m reminded of another sequel: “Friday the 13th Part VIII: Jason Takes Manhattan.” Now you would think these two films have completely nothing in common except for their R ratings but if you really think about it, they have something very much in common: they each have a promise in their titles that don’t really blossom to fruition. In the eight Jason movie we’re told that Jason will “take Manhattan.” We assume the film will take place there but as anyone who has seen the movie will tell you, most of the film’s running length is spend aboard a cruise ship headed towards New York. It’s only the climatic scenes that are actually set in the City That Never Sleeps (Especially now that Jason has taken a liking to it). In the Harold & Kumar sequel, we’re told that Harold & Kumar will “Escape From Guantanamo Bay” and yes they do, but it’s all so anticlimactic and brief that the movie really should have been titled “Harold & Kumar Don’t Go to White Castle” because that would be 100% true.

Now granted this isn’t the type of movie you’re really supposed to nit pick about because it does everything it’s supposed to do. It’s silly and stupid and provides a decent amount of laughs. The film takes place right after the events of the first film in a sort of Halloween II sort of way. Harold (John Cho) has just confronted the love of his life: his beautiful neighbor who just so happens to be flying to Amsterdam for a week. And his always-high roommate/best pal Kumar (Kal Penn) insists that they follow her to Amsterdam so that Harold can sweep her off her feet like in some cheesy romantic comedy. What could have easily turned into Eurotrip Part 2, doesn’t. Kumar is accused of being a terrorist during their flight and they’re sent to Guantanamo Bay by a sadistically racist and naïve defense general Ron Fox (Rob Cordry). You have to take the film’s humor with a huge grain of salt because none of this is supposed to be serious. Fox says there is “something wrong with Harold’s eyes” and his deputy insists it’s because he is of “Korean descent.” The film is filled with obvious racial stereotypes and that’s where most of the humor lies.

So before they know it Harold & Kumar are on the run from the authorities after their quick visit to Guantanamo. From there it’s a race to get to Texas where Kumar’s ex-girlfriend’s new Republican boyfriend who has government connections might be able to save their behinds. From there it’s a crazy journey through the southern states and they meet some crazy people along the way including a brother and sister who have a cyclops child together. They even run into the KKK and get peed on by them as well. And of course, the Pièce de résistance of the entire “Harold & Kumar” franchise is the cameo by none other than Doogie Howser MD himself, Neil Patrick Harris. Neil’s cameo in the first film is probably one of the better and most unexpected cameos of recent memory (Remember he was high on drugs and stole Harold’s car but not before humping the backseat?) Neil returns and brings Harold and Kumar to a whorehouse where Beverly D’Angelo is the House Mother. Neil’s exit is memorable and funny and the best reason to pay to even see any of this.

You know exactly whether you’re the right audience for this type of movie. It’s a buddy comedy that is silly and the writers (Jon Hurwitz and Hayden Schlossberg, who also directed) know this. We actually get to see some flashbacks to Kumar and Harold’s college days, which was fun to see. This is a film that will no doubt fit right in with all the other raunchy comedies that exist on college shelves across America. While I don’t know whether this is necessarily a better movie than it’s predecessor, like fast food, it’s quick, tasty and processed, which basically means you get what you paid for. GRADE: B-

It’s only the climatic scenes that are actually set in the City That Never Sleeps (Especially now that Jason has taken a liking to it). In the Harold & Kumar sequel, slackline

I wonder what they'll be doing next