Intelligent Design: “Smart People” Got No Reason to Live 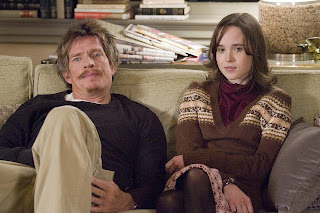 The only real reason to see Smart People, which is being advertised as “from a producer of Sideways” (eghh), is to see Ellen Page’s first post-‘Juno’ role. And here she’s sort of the Republican version of our favorite pregnant, hamburger phone-using teen. In fact, since seeing the movie nearly 5 days ago I can’t really remember much from it. The actors are good and most of the dialogue is funny, but there’s really not much going on in the film’s brief 95 minute running time. It’s a movie that’s enjoyable for the time and days later, you’ll probably forget that you ever went to see it.

Smart People is about a family. Dennis Quaid is the intelligent, but dull, college professor father. Thomas Haden Church is the not so intelligent freeloader/adoptive brother of Quaid. Page is the Young Republican/college prepping daughter of Quaid. And “A History of Violence’s” Ashton Holmes is Page’s college student older brother. Mom is dead. After Quaid injures himself while attempting to retrieve his briefcase from his car in the impound lot, he meets Dr. Sarah Jessica Parker who just so happens to be his former student. If you can’t swallow the fact that Dennis Quaid could have possible been Parker’s former professor, you wont even buy everything that happens afterwards.

The film doesn’t really have much going on in terms of plot. We basically get to see a few months in the lives of this untraditional family. When Quaid begins dating Parker, Page sees it as her stepping on her turf. It’s obviously been too soon since mommy has died. And then there’s the whole weird incest thing between her and her adopted uncle Church. He gets her to smoke and gets her drunk at a bar. Good thing she’s not pregnant in this one.

Overall there are a few good moments in the film, mostly due to Page’s brilliant acting style. This film is proof that she needs to be in every single film from now on. Parker and Quaid’s romance is iffy at best and not the most interesting storyline of the film. If Page was the main character it would be more memorable. The film isn’t stupid, Mark Poirier’s script does have some interesting touches. For instance, Quaid, having a small seizure can’t drive a vehicle for six months, which means Church insists on being his personal driver. Noam Murro is a good director and the film isn’t dun, it’s just not going to win any MENSA awards. GRADE: C+

Next, follow the manufacturer's directions to install the heat sink and the fan that will cool the processor.
The online stores that are specialized in these flashlights or torches have very good collection of
them. If you're wondering what the best system that whitens
the teeth is, bleaching solution is the majorities recommended.