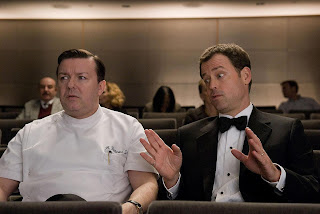 Remember that movie “Ghost?” A non-dancing/non-singing Patrick Swayze dies and leaves poor girlfriend Demi Moore all alone. He becomes a wandering sprit and he uses funny lady Whoopi Goldberg to communicate with his true love from beyond the grave. All those funny scenes involving Goldberg and Swayze were actually pretty funny for a heavily dramatic film (after all its director is one of the co-directors of Airplane!) So imagine taking all the funny parts out of “Ghost” and spinning it in a new way and you have “Ghost Town.” Schlubby dentist/person hater Ricky Gervais goes under the knife for a medical procedure, “dies a little bit,” and then is able to see and communicate with dead people who are roaming New York City because they have “unfinished business.” Imagine BBC’s “The Office” meets “Casper” crossed with “The Sixth Sense” and you have “Ghost Town.”

“Ghost Town” has funny parts which are mostly due to Gervais gifted, and dry, comic timing. As Dr. Pincus he is a lonely guy who doesn’t like talking with other humans which is why he’s a dentist. Patients can’t really strike up conversations while their mouths are full of cotton. I think he likes inflicting harmless pain on people as well. After his surgeon Kristin Wiig tells him that he had died for a few minutes on the operating table during a colonoscopy, Pincus begins seeing people around the city who are ghosts. These ghosts follow him around because he’s the only one who can see them and like I said, they have unfinished business. What’s funnier than a man who hates people to be constantly followed around by dead people?

The main storyline involves Greg Kinner’s ghost who died when he was hit by a city bus. His wife Tea Leoni lives in Pincus’ building and she’s seeing a new guy and Kinnear needs Pincus to make sure his wife doesn’t fall in love with this other guy. Oh and it seems as though Kinnear was having an affair and he didn’t live long enough to tell his wife the truth. So basically the entire movie revolves around Kinnear following Gervais around trying to get him to become friends with this wife. And wouldn’t you know they may just have feelings for each other.

The movie does have some extremely solid funny moments, but on the whole I felt the experience to be wishy-washy at best. If you’re a die hard Ricky Gervais fan then you’ll probably be satisfied much in the same way you’d be satisfied with “The House Bunny” if you love Anna Faris. Director David Koepp isn’t a novice when it comes to stories about ghosts and spirits after all he wrote and directed “Stir of Echoes” and “Secret Window” but he turns the genre upside by turning it into a Frank Capra fantasy-comedy. There are moments that work and moments that don’t. (Gervais and Leoni don’t exactly make the most likely couple) but I admire everyone trying their hardest.

I can’t whole heartedly recommend “Ghost Town” to everyone but if you’re a fan of Gervais and his British sensibilities or fantasy-comedy romps then by all means take a trip to Ghost Town. GRADE: C+

you were a bit harsh on my movie -ricky

Hi! Someone in my Facebook group shared this site with us
so I came to look it over. I'm definitely loving the information. I'm
book-marking and will be tweeting this to my followers! Excellent blog and brilliant
design and style.

The post is written in very a good manner and it contains many useful information for me :