How to Succeed in Idiocy Without Really Trying: “Burn After Reading” is a Smart Movie Filled with Stupid People 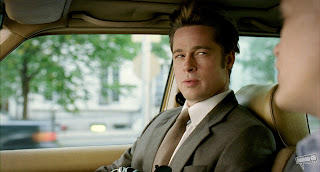 It’s almost been a year since the Coen brothers released “No Country For Old Men” on the movie going crowd. Ten months and four Oscars later, they have a silly farce up their sleeves called “Burn After Reading” which follows several wacky and unimaginably dumb characters who think they’re involved some kind of spy caper. It’s not cinematically meaningful or psychologically rewarding or any other highbrow terms one uses to describe important film art. It is a silly farce with weird characters who look weird, sound weird, do weird things and have weird names. It’s all very…weird.

Basically the film starts with Osborne Cox (John Malkovich), who has just been fired as a CIA agent. Because he has so much time on his hands he decides to write a memoir. I’m sure he’s had a thrilling life, but “retirement” is never like this: A CD-rom containing his memoir was found by employees who work at a gym. Co-workers Chad Feldheimer (a skunk stripe-coiffed Brad Pitt) Linda Litzke (France McDormand), who seems like she could be a distant cousin of Marge Gundersun, think the disc contains super secret CIA information and decide to contact its owner and blackmail him for lots of cash. Even though Linda works in a gym, she feels she needs plastic surgery to fix those “problem areas.” After all, all the exercise in the world won’t get rid of crow’s feet. Osbourne’s life gets turned upside down by these weirdoes who aren’t very good at blackmail.

Meanwhile, Osborne’s wife (Tilda Swinton) is having an affair with an eccentric man named Harry Pfarrer (Coen alum George Clooney) who always has to go for a jog after having sex. And he has probably invented the weirdest sex toys in the history of weird sex toys. Harry becomes paranoid when it appears he’s being followed by a guy in a car. It’s interesting to see Clooney in this performance because while its not really bad acting, its certainly a far cry from his previous Oscar-nominated effort “Michael Clayton.”

Basically the whole point of all of this is that (Potential SPOILER) there really is no super secret CIA disc and all of these characters get involved in something they thing is top secret and life threatening, but its not. (It’s the Mother of all McGuffins) Of course that doesn’t stop life threatening things from happening. This is a spy caper written by the Joel & Ethan Coen after all, so it’s highly likely that someone isn’t going to make it to the end credits. One scene in particular is just too good to spoil here. And besides with Carter Burwell’s dark, thumping score, you really get the sense that something bad is coming anyways.

Remember I said the characters are really weird? Well they are; really, really weird. Pitt is having a blast playing the strangest character of his career, and that includes the weirdo he portrayed in “12 Monkeys.” He likes to rock out to his iPod while he works the treadmill and insists on riding his bike to the “trade off” even though he’s wearing a suit and tie. Pitt here is hilarious. And Linda is even stranger. After Osborne fails to pay them off, she goes directly to… the Russian embassy. To accomplish what exactly? I don’t know, but if you’re an idiot who thinks you’ve found a top secret CIA disc, that’s what you do.

In fact “Burn After Reading” could easily play as a training video on how to be a complete moron. You’ll laugh and find some twists and turns. Mostly sit back and enjoy the moronic shenanigans. And try to fit in a jog afterwards. GRADE: B

PS – Love that “Burbs-like” opening sequence that zooms into the globe and ends up at a CIA facility in Washington DC.

This is my first time go to see at here and i am really pleassant to read all at alone place.