Something’s Rotten in the State of Arizona: To See or Not to See “Hamlet 2” That is the Question 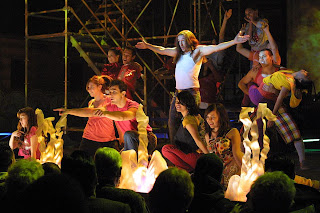 Early in “Hamlet 2” Dana (Brit Steve Coogan) comes home to find his wife Brie (Catherine Keener) hanging out with Gary (David Arquette). They’ve taken on a third roommate because they need the money. Gary doesn’t really do much besides work out apparently and follow the married couple everywhere they go which includes a fertility clinic (which happens to employ one Elizabeth Shue, but more on her later). Gary pretty much gets to do nothing in the handful of scenes he’s in which is a testament to some of Hamlet 2’s occasionally sloppy writing. It’s apparent the screenwriters couldn’t think of anything else funny except for some rather catchy and enjoyable lyrics to their big musical number “Rock Me Sexy Jesus.” What does this have to do with the Shakespeare tragedy? Not much really.

Dana is a former bad actor. He starred in some really bad commercials in one of which he played a herpes patient. The film starts similarly to the opening of Tropic Thunder. It shows us a few faux ads starring the actor within the film. Both films want to be satires, but I think “Tropic Thunder” is more successful and not because it has 34 times the budget of the Sundance favorite “Hamlet 2.” Hamlet 2 feels like a low budget movie, mostly because it is, but I can’t help to think that if director and co-writer Andrew Flemming (director of my 11th favorite movie of all time ‘Threesome’) could have spiced up his film a little if he had some extra dough to go around. Not that money can buy you extra jokes. The film has plenty. I laughed a lot. But there were just sections that either felt forced, boring, or awkwardly paced. Maybe they could have used the extra money to hire a better editor or someone to actually compose some sort of music score. ‘Cause the film feels slow. No music can work for “No Country for Old Men,” not for a slapstick comedy.

Now that I’ve gotten that all out of the way let’s focus on Hamlet 2’s strengths. But first, what’s it all about. Remember I said Dana is a bad actor. He’s so bad, he’s ended up in the drama department of a Tucson, Arizona high school. He writes his own plays based on previously published material. For instance, we get to see a glimpse of his amazingly bad dramatic production of “Erin Brockovich” starring the two theatre brats who star in all the plays. These plays are awful and the school board is making cutbacks, which is always the case in these movies. During a new semester, in which he has a large influx of students taking drama for the first time because it was the only elective left, the drama critic for high school paper insists he put on a play that will be so amazing they won’t be able to cancel drama. So of course he opts to writing an original piece: a sequel to the Shakespearean tragedy “Hamlet.”

Much of "Hamlet 2" has to do with Dana’s wacky, insecure character (who like Hamlet, has some serious daddy issues) attempting to coast through life merrily. Eventually his wife leaves him for Gary the third roommate for no real apparent reason. (Oh, wait I forgot that Dana is "shooting blanks") The movie really gets going once we actually get to see the students perform Hamlet 2, which as far as I can tell, has not much to do with the original and co-stars Jesus (played by Dana) and a special cameo for Hillary fans. But it does feature some hilarious numbers such as "Raped in the Face” and the aforementioned “Rock Me Sexy Jesus” which is so catchy I recommend downloading it from iTunes. The musical which gets attention before its opening starts a firestorm in the conservative town as a mockery of religion because, according to the principle, it features “the devil making out with the President of the United States.” The brilliant Amy Poehler shows up as a first amendment rights attorney named Cricket Feldstein who insists the play go on as scheduled. What began about a bad actor, who is an equally bad teacher, dissolves into a commentary about the role of art in society and freedom of speech. It just takes some time to get to the “Rock Me Sexy Jesus” part.

“Hamlet 2” isn’t really a total wash, because I saved the best for last. Even though she’s not really given much to do, Elizabeth Shue does show up here as herself. Apparently she’s gotten sick of Hollywood (perhaps because Hollywood got sick of her?) and decided to try out nursing instead. Much to Dana’s excitement she offers to speak to his class and answer questions (even though they don’t really know who she is). She even comes to see the premiere of “Hamlet 2” and really enjoys herself.

Any movie that has Elizabeth Shue making fun of herself and has irreverent songs with a dancing Jesus is fine in my books. Hamlet 2 is weird and different and it has bad parts and good parts. It’s really a mixed bag. Like a box of chocolates, you really don’t know what you’re gonna get. GRADE: B-