If the Shue Fits: 10 Things I Love About "Adventures in Babysitting" 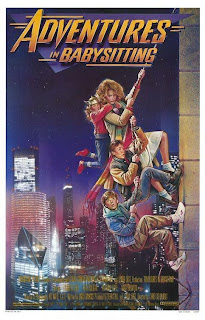 In honor of Elizabeth Shue's upcoming role as Elizabeth Shue in "Hamlet 2" I have decided to write about my second favorite movie of all time.

1) The Opening Dance Number. Anyone who has seen this movie more than once has attempted to reenact Elizabeth Shue’s corny dance to “And Then He Kissed Me” during the movie’s opening titles no matter what gender you are. Or am I the only one? This scene is so overly corny and silly even by ‘80s standards (yet still wonderful) how did anyone watch the dailies with a straight face?

2) “Don’t F*** with the babysitter!” During the gritty elevated train gang fight, this line of dialogue was so shocking for me to hear as a child. Let alone the first F-bomb heard just seconds before by one of the gang’s leaders. The redubbed line aired on the TV version is even better: “Don’t FOOL with the babysitter!” The word ‘babysitter’ instantly became a synonym for terminator.

3) The Smurfit-Stone Building. Why little Sara would choose to go “out the window” is beyond me, but it’s as close to a “Die Hard” action sequence as we can get for a PG-13 rated movie about babysitting misadventures. I love how Sara says “Mom? Dad?” while hanging out the window as if they could hear her. Now I know why she’s wearing that Thor helmet…

5) Brenda at the Bus Station. Chris Parker’s best friend’s (and runaway/band member) misadventures at a scary downtown bus station are just as entertaining as what Chris and her charges go through, including picking up a jumbo-sized sewer rat, trying to purchase a hot dog with a check, a run in with a homeless guy who lives in a phone booth and seeing a bald Chinese lady with no pants on.

6) Thor, Mighty God of Thunder. Thor is roller-skating Sara’s favorite superhero. (“He fights the forces of darkness.”) She even wears that ridiculous Thor helmet throughout the entire movie even when hanging off the side of a skyscraper. That is commitment. Vincent D’Onofrio showing up as an auto mechanic who Sara believes to be Thor is priceless. 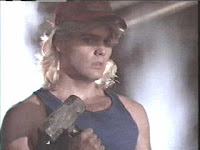 7) 'Handsome' John Pruitt. The bearded truck driver with a hook for a hand (which he supposedly keeps in the glove compartment) who scares the hell out of the gang but eventually turns out to be the good guy is just too amazing for words. And he beats the crap out of the guy who’s banging his wife. I thought this was a kid’s movie?

8) The Anderson Family. Mr. and Mrs. Anderson are the typical suburban couple. They go off to glorious dinner parties in the city and leave the local teen in charge of their kids. And you can tell they care about their children (“Take care of my baby!”) and even offer smart health advice to Brad (“Will you stop eating chocolate, you’re gonna have zits all over your face.”) but they still have a soft spot because they allow Chris to take Brad and Sara to Häagen-Dazs even thought they never quite make it. Brad and Sara have the classic big brother, little sister relationship. They get on each other’s nerves and make fun of each other but they do love each other.

9) The Babysitting Blues. We’ve learned from the opening sequence that Chris Parker is a faker. She just lip syncs. But can she really sing? She insists she can’t when her and her charges appear on the stage of a groovy blues club in the city. (“No body leaves this place without singing the blues!”) This sequence is amazing and shows the musical theater potential for Adventures in Babysitting as a Broadway show. (No?) of course the suburban white kids win over the Black crowd by song’s end and perhaps even landed a record deal.

10) Michael Myers’ cameo. Those hard core fans will notice that during an early scene in the Anderson house the movie “Halloween” (my fourth favorite film of all time) can be seen playing on the TV in the background. You can even hear John Carpenter’s eerie music. Debra Hill who co-wrote and produced “Halloween” just so happened to be a producer of “Adventures in Babysitting” as well. GRADE: A+

Check out a clip of Shue in "Hamlet 2" here: