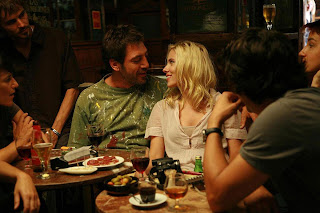 I’m one of Woody Allen’s biggest fans and I’m only 25. If you were to ask the average 25 year old to name their favorite Woody Allen movie (let alone a Woody Allen movie) I bet you they’d give you a blank stare. I have seen twenty seven of his films. I’ve seen many more than once. I’ve seen some more times than I can count. I’ve loved many of them and disliked only a few. The general consensus seems to be that “Vicky Cristina Barcelona” is one of Woody Allen’s best films in recent years. Okay I’ll give that to him. It is a good film. Did I enjoy it as much as his others? No. It has good acting, gorgeous cityscapes (this time in Spain) and typical Woody Allen dialogue. It’s a film about characters who talk and drink wine and talk and look at art and talk and fall in love and talk and fall out of love. (If this isn’t a direct reflection of my life I don’t know what is.) Okay in all honestly, I can’t really relate with hardly any of the characters that Woody Allen has conjured up in the past 40 years but they are sometimes so fascinating to watch. Except in “Barcelona,” where the plot revolves around relationships, it’s hard not to be mildly bored.

Vicky Cristina Barcelona from the start is sort of an uninteresting story. Two twenty-something American girls, who have opposite views of love and relationships but are very close friends nonetheless, embark on a summer vacation in Spain where they’re staying with one of the girl’s family friends (Patricia Clarkson and Kevin Dunn). One of these girls is Vicky (Rebecca Hall) who is engaged to her boring fiancé who’s back home in New York and has a pessimistic view of love, or rather that she’s destined to be monogamous and stay with “the one” until the end of time. And then there’s Cristina (Scarlett Johansson) who’s the more “loose” and wild of the two. When a handsome, rugged Spanish painter named Juan (Javier Bardem) invites them to spend a weekend together sightseeing Cristina is game and Vicky is hesitant. Granted they both go, but its sort of unpredictable what will happen next.

So after a lot of Woody Allen dialogue about love and relationships and why people are and aren’t meant to be together, both girls end up falling for Juan, at different points but then a curve ball is thrown their way in the form of Juan’s crazy ex-wife Maria (Penelope Cruz in her buzzed about role) who sort of brings the film to life. A film that had previously been about a threesome (think Jules e Jim anyone?) is not transformed into a film about a foursome. (A love square?) By the time Cruz finally appears on screen the movie which had been about pretty people talking and visiting pretty Spanish locations and viewing pretty Spanish art has transformed into the story of a painter and his bitter (and slightly psychotic) ex-wife who doesn’t want any woman, let alone two, in his life. Maria’s still enamored with her ex-husband, even if she did try to kill him, and doesn’t want to “share” him with anyone else. Cruz simply sets the screen on fire. She’s a far cry from her days as Tom Cruise’s lover in “Vanilla Sky” (and real life for that matter) and it’s fun to see her go from speaking Spanish to English and back again and the way she delivers her lines and shifts her eyes is simply great.

“Vicky Cristina Barcelona” is an ode to Barcelona the way that “Manhattan” was an ode to the Big Apple. Woody Allen has made a movie filled with characters who prance around the city, falling in and out of love like a Shakespearean comedy, except besides the beautiful cinematography it isn’t that interesting. Allen has made realistic and fully formed characters but none too appealing. The plot isn’t all that exciting either and the film’s dialogue while at times amusing isn’t really funny. I smiled and chuckled a few times, but if you’re expecting a comedic romp you’ll be disappointed, like me. I thought this, like Match Point, was a return to form. But alas it is just another notch in Allen’s cinematic belt.

I sort of felt like someone who has never seen a Woody Allen movie because they’ve never wanted to see a Woody Allen movie. Allen is an acquired taste that I have more than definitely have acquired. I love almost all of his movies that I’ve seen. And I must say that of his recent ones, I didn’t nearly enjoy this one as much as “Match Point,” “Scoop” and “Cassandra’s Dream.” But then again, I didn’t really enjoy “Manhattan,” so if you’re a disgruntled old school Woody Allen fan maybe you’ll get something out of “Vicky Cristina Barcelona" and maybe I'll enjoy it more on a second viewing, but for me I’d rather watch Woody Allen solve a murder with Diane Keaton any day of the week. GRADE: B-

Hi! I just would like to give you a big thumbs up for the excellent information you have got right here
on this post. I will be coming back to your blog for more
soon.

Whats up this is kind of of off topic but I was wondering if
blogs use WYSIWYG editors or if you have to manually code with HTML.
I'm starting a blog soon but have no coding know-how so I
wanted to get advice from someone with experience.

Any help would be greatly appreciated!