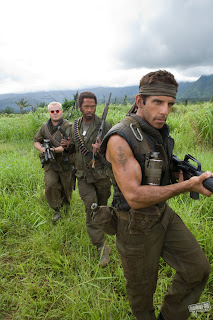 "Tropic Thunder" is a movie for movie lovers. It mocks Hollywood while at the same time still paying homage to why we go to movies in the first place. We want to see things like good acting and explosions and even fart jokes once in a while. Tropic Thunder skewers everything from the “serious” actor who feels he needs to play the role of a mentally challenged person just to be respected. And we have those actors who play various roles in one movie, usually hidden by pounds of grotesque “fat person” make-up. And then there are those method actors who are willing to go far to “immerse” themselves in a character that they will undergo an entire medical procedure to play a certain role.

In fact, the very best character in “Tropic Thunder” is the one played by Robert Downey Jr. (who is simply having the best year ever, having stared in May’s super hit “Iron Man”). Downey Jr. plays an Australian actor named Kirk Lazarus who surgically dyes his skin so that he can play an African American solider in the movie within a movie called “Tropic Thunder” (Oh and he has five Oscars by the way). He is joined by fading action star Tugg Speedman (director Ben Stiller) who is represented by his agent Rick Peck (played surprisingly well by Matthew McConaughey). Also starring in this Vietnam War drama is comedic actor Jeff Portnoy (Jack Black) who is the star of the popular "Fatties" franchise of films in which he plays all the members of a large, obese family who all seem to have serious bowel control problems. Oh and like most people in Hollywood he’s addicted to heroine.

During the making of “Tropic Thunder” the director Damien Cockburn played by Steve Coogan decides to shoot guerrilla style in the jungle. He has set up multiple cameras and his pyrotechnician Cody (Danny McBride) has set up all the cool explosions. What they don’t know is that there are some seriously real drug lords hiding out in the jungle who mistake these actors for real DEA agents. And since we know that actors are as dumb as nails, these guys think they’re actually shooting the movie. What follows is almost two hours of nearly full throttle laughter and enjoyment all while totally satirizing the filmmaking industry.

Robert Downey Jr.’s character is amazing because as a method actor he plainly stays in character. So we have Downey Jr. playing an actor who is constantly playing a role. And this guy who is obviously white seems to have no problem with the fact that he’s obviously in blackface the entire time and thinks of himself as a black man. It may seem offensive and perhaps some will find it so, but it’s so politically incorrect it's impossible not to find the humor in it. The film (who Stiller co-wrote with actor Justin Theroux and Etan Cohen) is just making fun of actors who are willing to go so far to become a character or willing to play a mentally challenged person to gain acting credibility. Since the Speedman character’s acting profile is waning, he makes a movie called “Simple Jack” in which he plays a mentally challenged person. He never got nominated for the role (and the film was a flop) because Lazarus insists that he went “full retard.” Movies like "Forrest Gump" and "Rain Man" brought Oscar gold to their stars because they didn’t go over the top while playing a mentally challenged person. The audience was still able to “identify” and “connect” with them.

“Tropic Thunder” is completely silly in the way that most of Stiller’s movies are, but it’s a lot smarter than you would think. Real movie fans will get a kick out of the little film references here and there. And audiences will really get a kick out of seeing a nearly unrecognizable Tom Cruise play a foul-mouthed studio executive (And look out for other great cameo appearances as well). Talk about a waning star trying to get back his former glory. "Tropic Thunder" is an exercise in Hollywood mockery done right and done down right hysterically. GRADE: A-

Note: Be sure to get to the theater early because you don’t want to miss the absolutely hysterical opening faux trailers. They are simply worth the price of admission all by themselves.