Generation Text: “American Teen” is a Fascinating Probe into the Lives of America’s Youth 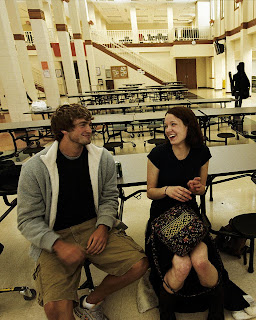 We all remember who we were in high school. Everyone sort of fit into a standard clique. Who were you? I was in the marching band. Most of my friends consisted of people in the band because we were pretty much always together throughout the year. Although marching band screams “dork” I feel like I was always just a step ahead of that label. I wouldn’t say I was necessarily “popular” although many people knew me. Perhaps they were just making fun of me behind my back, but I think most people knew I existed. I had lots of friends. I always had someone to walk to class with and to each lunch with. In fact, high school was one the most enjoyable periods in my life. That is until I went to college of course.

The documentary “American Teen” (which sort of bills itself as a real life “Breakfast Club”) follows a few students throughout their senior year of high school in Warsaw, Indiana. Each student sort of fits into that standard high school social group we all know so well. We get Colin the sports jock. And Megan the popular princess. And Jake the geeky outcast. There’s Mitch the handsome stud. And Hannah the rebellious girl who’s not really popular but who’s not really a dork either. Director Nanette Burstein’s cameras capture the kids’ lives and edits it down to 100 minutes of absorbing drama. The film never feels manipulative or manipulated for that matter. Everything seems genuine from Megan’s breakdown when she gets her college acceptance letter to when Hannah’s boyfriend breaks up with her after two solid years of courtship. The whole thing sort of plays out like a Saturday afternoon marathon of MTV’s “The Hills” except with teenage personalities actually worth following around with cameras 24/7.

On the surface all five kids are your typical high school walking and talking clichés. But as the film progresses we learn that each kid has idiosyncrasies that differ from the formula we’ve all either experienced ourselves or from countless Hollywood films. For instance, we learn the Queen Bee/Popular bitch (Megan) has an emotional family past in which we see this girl as a human being worth sympathizing. The popular heartthrob/basketball player (Mitch) sees the rebellious loser outcast (Hannah) during a battle of the bands competition and realizes he just may have feelings for her. If there’s anything to gripe about it’s that Mitch doesn’t seem to be as fully integrated into the film as much as the other kids. Perhaps he wasn’t as interesting a subject as Burstein initially thought?

The film may not feel as important as, say, something like “Bowling for Columbine.” In fact I could see some negative critics saying it’s just a long episode of “The Real World” where the film punctures innocent kids’ lives who are just camera hogs (And by the way, yeah teenagers are teenagers after all and they drink, have sexual relations and make really stupid decisions, but you have to give props to the filmmakers for not downplaying it or interfering with any of it. The kids feel comfortable with the cameras present and you can sense that their actions are authentic. They are actual people with aspirations). I’m not sure I know what the director is really trying to “say.” Perhaps not anything. She presents us with her subjects and we’re supposed to gleam from it whatever we can (Like maybe you shouldn’t throw chili on the dorky kid in middle school). To me it felt more like a serious nostalgia trip. Many fun and emotional times came flooding back to me because all the standard high school moments are portrayed such as trying to get into college, winning the big game, prom and that final exclamation point known as graduation.

To me “American Teen” feels important because it’s something I can relate to and I’d be lying if I said I didn’t feel emotionally connected to at least all of the kids at some point. High school wasn’t too long ago for me and it was still an important step in my life. It’s significant to most people. Some people want to forget it and some want to cherish it. Whichever way you feel “American Teen” is worth taking that trip down memory lane. GRADE: A-

Really when someone doesn't be aware of after that its up to other viewers that they will
assist, so here it happens.

Here is my homepage Inverter Yaskawa