Thank You For Smoking: James Franco and Seth Rogen Hit a High Note with “Pineapple Express” 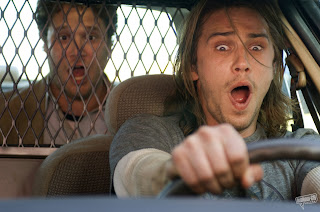 Writers Seth Rogen and Evan Goldberg have an unnatural gift. They have some strange ability to make characters who would be annoying and obnoxious in other movies but perfectly lovable and enjoyable in the right script. These are characters who don’t really have any purpose or goals and who spend 97% of their day doing drugs and yet we want to watch them on their fascinating journey. After all, most of the reason why any of the stuff that happens in Pineapple Express is funny is because the main heroes are always as high as a kite. These guys smoke enough grass to make Cheech & Chong jealous. And this isn’t just a simple “smoke weed and get the muchies” type of stoner comedy like “Harold & Kumar Go to White Castle” or the I-only-watched it-because-Anna-Faris-was-in-it stoner comedy “Smiley Face.” There is actually a lot going on here even though the plot is simple and there’s always something interesting happening. I think the places where the film gets bogged down is when it can’t decide if it wants to be just a silly comedy or an action movie. And I thought the ending went on a little too long, but I wouldn’t call it a bad ending.

Dale Denton (Rogen, charming and goofy as ever) is a process server. He gives people subpoenas to appear in court and such and his job sometimes requires “disguises” to make it easier to approach people. It may not be the most fancy job, but he makes a living. However, he smokes a lot of pot. Saul Silver (James Franco, a seriously funny standout performance) is a pot dealer. In fact he is Dale’s pot dealer. They are somewhat friends mostly because of their business. Saul introduces Dale to a special weed batch known as ‘pineapple express’ of which he’s the only dealer who has it. Late one night while on the job, Dale is in the wrong place at the wrong time and witnesses a murder by Ted Jones (Gary Cole) and a female cop played by Rosie Perez. Yes I said Rosie Perez. Ted and the cop see the witness but can’t identify him, but notice that the joint left by Dale was in fact a pineapple express joint. Dale runs to Saul’s place and tells him what happens and they immediately get the heck out of there because Saul is the only dealer known to carry the pineapple express. Silly chases scenes ensue. (My favorite part being when Franco attempts to kick out the front windshield of the car he’s driving, which results in his rubbery-looking foot getting stuck in the window)

The movie’s strengths rely mostly in the chemistry between Rogen and Franco. Even though they make dumb choices on many occasions: Um lets see, they are being chased by a killer, so let’s just smoke up! Of course that’s the appeal to this movie, because it wouldn’t nearly be as funny if they weren’t stoned most of the time. Danny McBride is also great as Saul’s dealer who like any good action star can survive bullets to the gut and explosions. The movie really shines in its little details such as the brilliant production design. Check out all the really silly things hanging out in the background. Like why is that painting of Santa Claus hanging out on Saul’s living room wall? And just the fact that Saul has a t-shirt with a shark swallowing a cat speaks greatly of the film’s master costume designers.

I was sort of surprised at the level of violence in the movie although I’m not saying its really a negative, but sometimes I felt that the movie was trying to be a serious gangster film rather than a buddy film. There are some stretches where there aren’t any laughs and that wouldn’t really be a problem if there was more of an interesting plot. I mean for the most case things move along swiftly and its sort of unpredictable what will happen (like in the scene where Dale and Saul get caught selling pot to the young kids during recess).

Director David Gordon Green who is known for his more independent offerings (such as the Jaime Bell drama “Undertow”) seems like an odd director choice, but he sort of follows the footsteps of previous Apatow productions. Like Greg Mottola of “Superbad” and Nicholas Stoller of “Forgetting Sarah Marshall,” this movie will be a breakout for a filmmaker who has miles of great movie work ahead of him. I wouldn’t mind seeing Rogen and Franco work together again, even if it means having to watch “Freaks and Geeks” on DVD. GRADE: B+