Puttin’ on the Ditz: Anna Faris Barely Saves “The House Bunny” From Eviction 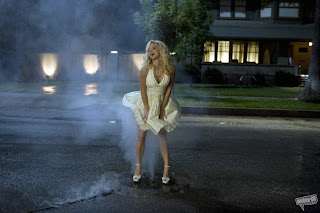 Anna Faris is one of the most talented young comedic actresses working in Hollywood right now. It’s just that she’s almost rarely given the right material to work with. She makes appearances in critical darlings like “Lost in Translation” and even “Brokeback Mountai.” And even stars in critical dumping grounds like “Waiting…,” “My Super Ex-Girlfriend” and the “Scary Movie” franchise. My personal favorite performance of hers is probably of Jessica Simpson wannabe Samantha James in “Just Friends.” That was a movie that was worth sitting through because of Faris’ perfect comic timing and outstanding screen presence. She’s one of those people who can make you laugh with just a silly look such as simple widening of her eyes. She tells jokes with her face.

The only real reasons to even watch Faris’ latest vehicle, “The House Bunny,” is because of her. Just the idea of her portraying a Playboy bunny is funny in itself. Faris is Shelley Darlingson who partying in the Playboy mansion with her “family” and dreams of getting her own spread in the magazine. After her 27th birthday celebration she gets a note from Hugh Hefner informing her that she’s too old to be living in the mansion and must vacate immediately. Before she can say “I know what boys like” Shelley is homeless and depressed. She stumbles upon Greek row at a local university and makes friends with the losers of the Zeta Alpha Zeta (ZAZ for short, and am I the only one who’s thinking the Airplane! trio here?) sorority who put the reek in Greek. The outcast sorority, which is about to have its charter revoked for lack of membership and blonde hotties, is lead by Natalie (Superbad’s Emma Stone). Natalie thinks that Shelley’s provocative lifestyle could be just the thing her sisters need to gain membership and save the sorority. What we get is a handful of sloppily written stereotypical characters (the husky, manly foreign girl who overacts and former ‘American Idol’ runner up Katherine McPhee as the pregnant girl who squeegees her belly during the car washing scene) that don’t even seem like real people who must be transformed into beauties. Think “from geek to chic;” paging Maury Povich.

Most of the laughs revolve around Shelley’s previous lifestyle being a slutty Playboy bunny who walks around daily like she’s about to enter a brothel. Faris carries most of the humor mostly with her physical appearance and some funny sight gags. When she stands over a steaming manhole to pose like Marilyn Monroe, she gets wickedly burned and screams. That was my favorite part of the film’s trailer and its probably the funniest part of the actual film. (Besides the odd way Shelley learns peoples’ names by pronouncing them out loud like little Linda Blair from “The Exorcist.”) In most movies like this we usually don’t care too much about the plot but here I did want to care and I just couldn’t. Sometimes the lines of dialogue and the jokes and the story were just all a little too much to handle and the final product is mostly Grade D when it should be Grade A. (the film’s writers’ previous efforts include “Legally Blonde” and “10 Things I Hate About You,” which were simply and enjoyable diversions). I guess I was expecting a little bit more.

If you’re a fan of Anna Faris I would give this a mild recommendation, but otherwise you’d probably be smart of steer clear of “The House Bunny.” I don’t really regret seeing it, but I almost wish that it offered a better showcase for Faris’ talents. If you want to watch a stupid movie in which Faris will make you laugh, rent “Just Friends” instead. I’m looking forward to a future Anna Faris that will make full benefit to her talents and will widen her audience even more. Until then, I guess we’ll have to settle for “The House Bunny.” GRADE: C+