Who’s Your Daddy?: Take a Chance on the ABBA-solutely Catchy “Mamma Mia!” 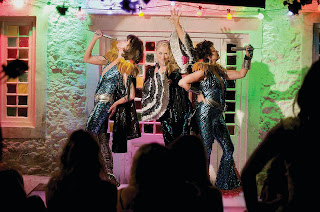 Let’s all face the truth. ABBA music is like crack without the harmful effects. You know you shouldn’t give in, but you just can’t help it. Before you know it you’ve listened to Mamma Mia 23 times in a row and you’ve begun a downward spiral of incessantly catchy disco pop tunes. You stop just short of donning neon spandex and glittery platform boots. It’s just too hard to “just say no.” So with that in mind, you will leave the movie theater after seeing “Mamma Mia!” humming, whistling or belting out your favorite tune. Even if you don’t like musicals I’d find it impossible to at least not tap your feet along to the appealing beat let alone dancing in the aisle with one of the old ladies sitting near me (of which there were many).

So with that being said “Mamma Mia!” features really fun, catchy songs and moderately interesting staged music numbers and a story tailor made for musical theater (which, shocker, was adapted from the popular Broadway musical) and features likable actors singing and cavorting throughout the 110 minute runtime, including a hilariously fun encore/end credit sequence that is worth the price of admission alone.

Phyllida Lloyd directs, Catherine Johnson writes and Meryl Streep sings! What we get here is Streep (soon to be Golden Globe nominated, I’m sure) singing and dancing as Donna who is busy planning her daughter Sophie’s (“Mean Girl” Amanda Seyfried) wedding who is getting married to Sky (Dominic Cooper) in their Greek villa where the wedding is to take place (which is also where Donna raised Sophie). Problem is Sophie has read Donna’s old diary and invited three of her mother’s past beaus, one of which she believes is her father. The possibilities include Pierce Brosnan, Colin Firth and Stellan Skarsgård. Two of Donna’s girlfriends arrive to the island for the festivities which include Christine Baranski (great) and Julie Walters (hysterical). Let the fun begin! So with all the wedding stuff going on (including a “hen party” and “stag party” which then turns into one of the most fun looking parties ever) there is plenty of catchy singing to belt out! And the Greek villa staff is ready to lend a hand with the sweeping and with the singing. Good to see some actual Greeks in this thing.

While I’m not sure it’s quite as good a musical as last year’s surprise hit “Hairspray” (nor as original as the completely underrated Beatles musical “Across the Universe”) it is still as fun and catchy. It’s not draggy or boring, but it’s probably more “awkward.” Meaning that when the characters first break out in song, it’s a little weird and alarming. But once the shaky beginning gets going (which is mostly plot exposition) the fun can really begin. The staging of the number “Dancing Queen” especially injects some life into the film and from then on is a toe-tapping romp until the amusing ending. After that, almost every music number is bigger and more exciting than the last including for example a bunch of guys with flippers frolicking on a dock to the tune of “Lay All Your Love on Me” and Meryl Streep performing “Super Trouper” at her daughter’s bachelorette party.

We get fun tunes like “Money Money Money,” “Gimme! Gimme! Gimme!” and “I Do! I Do! I Do!” No wonder ABBA’s songs are so infuriatingly catchy; they sing the same thing over and over and over again! Of course if you dread any or all of these songs, steer away because you’ll probably want to jump off a pier. I rather enjoyed myself and went straight home to download the soundtrack. And I was actually a little surprised by the cast. Streep can obviously do anything, and showed off her pipes quite well. Seyfield also has a very good voice. I wish I could say the same for the former Mr. Bond, Brosnan. I mean he’s not really bad, but I sort of cringed when he sang.


Overall the movie is just pleasurable, like any junkie will tell you, sometimes it’s just hard to say no. And while there aren’t many side effects to watching a movie like this except for those around you might smack you upside the head for getting Super Trouper stuck in their head. Take a chance on this movie, enjoy the beautiful scenery, the beautiful people, and say I DO already! Geez, I want to see this movie again. “Don’t go wasting your emotion…” GRADE: B+

I'm really loving the theme/design of your site.
Do you ever run into any browser compatibility problems?
A couple of my blog visitors have complained about my site not operating correctly in Explorer but looks great in Chrome.
Do you have any solutions to help fix this issue?