Stuporman: “Hancock” is a Horrible Superhero in a Watchable Film 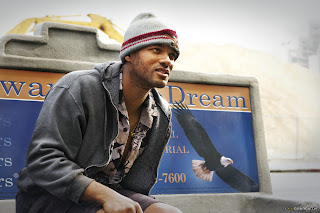 He definitely has the wrong stuff. Will Smith plays Hancock. Hancock is a superhero who isn’t quite so super. I mean he does have the trademark superpowers like flying and super strength and being able to deflect bullets. But he has a really bad attitude. He’s lazy and resembles the bum on the street corner rather than Captain America. He takes his time coming to the rescue and when he does he ends up causing more damage than the city of Los Angles is willing to forgive. This is an interesting concept for a superhero film. The film has its pros and cons but the film mainly works due to Will Smith and Jason Bateman’s good comic timing.

One day Ray Embry (Bateman) is stuck in traffic in the middle of a train track when during which a train just so happens to be barreling down the track. With cars in front of him and behind him and a sticky seatbelt it looks like he’s a goner. That is until LA’s superhero Mr. Personality Disorder Hancock comes to his rescue. Those civilians at the scene are distressed that this superhero has alcohol on his breath and smells bad and caused property damage even though he rescued Ray. It just so happens that Ray is a PR guy and wants to makes things right for Hancock.

Enter Ray’s wife Mary (Charlize Theron) who gives Hancock a weird smirk when she meets him. Perhaps she has a secret she doesn’t want anyone to know. Well if you have half a brain you’ll realize something is up between these two. And if you saw a pivotal sequence of the film being filmed on Hollywood Blvd like I did last September then you’ll know the film’s secrets right from the beginning. But that doesn’t matter too much as the film is so good at not fitting into one specific genre that it makes it worth seeing for that alone. It’s one big cheesy casserole that has all the ingredients: comedy and drama and action and emotion and romance. It’s a superhero film that doesn’t follow the clichés of a superhero film, which means it ultimately feels refreshing in a summer filled with hulks that are incredible, a man made of iron, and a knight that is dark.

If the film has any one flaw it is this. Its director (Peter Berg) insists on instructing his DP (Tobias Schliessler) to shoot his stars in extremely extreme close-ups. I mean back up just a little! Has this guy never heard of a medium shot? Also, the camera is so jittery and shaky (usually a filmmaker’s way of showing the film’s “reality” or “documentary” style) but here it’s frankly just annoying. I mean this isn’t a dramatic war movie this is a summer action movie. It felt forced and unnecessary.

The film really sort of has two distinct halves. The first is the story of a lackluster superhero who is cranky and whiny and Will Smith, who is a really good actor, despite the fact he’s always in a summer blockbuster, really pulls this off. Hancock is not an easy person to like but it’s fun to watch his story unfold. And then we half the second half which to spoil is to ruin the surprise.

This isn’t an easy film to recommend, but I found it easy to digest and entertaining. Bateman is a master at playing the “straight man” stuck in a whirlwind of chaos around him (which he did for three years in the low rated, high praised TV sitcom “Arrested Development”). And as for Charlize, you’ll wonder why this Oscar winner is really doing here, but she does a good job despite some of the things she’s forced to do in the film’s later scenes. All in all, you could do a lot worse than Hancock. GRADE: B

The rolex replica sale as well as band appear excellent and also the replica watches uk is extremely conventional along with contemporary minimal rolex replica sale. A fascinating style observe that swiss replica watches brings up is actually how the Rado point logo design placed directly under 12 clock really breitling replica. I suppose this re-writes close to just like a small replica watches sale basidialy realize their own vocabulary properly.