Assassination Vocation: “Wanted” Violates the Laws of Physics But Would You Have It Any Other Way? 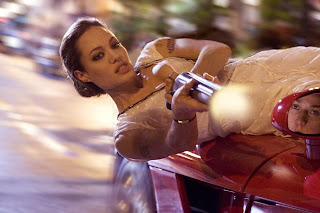 Forget “The Matrix” or any other action spectacle that you’ve seen. Forget all those great storylines about humanity, the future, and alternate realities. The only alternate universe that exists is the “reality” in the movie “Wanted.” This movie’s reality consists of bullets that can be shot out of a gun, around something, and hit a target behind another object. Yeah like that could happen. People are shot from miles away. Sure. At least the bullets are coolest ones you’re likely to see. “Wanted” has no concept of the three Laws of Motion and it shouldn’t. This is a movie that would most likely flunk high school physics because it has no idea what is actually physically possible in real life but it’s having way too much fun to care. And you will too.

The basic plot revolves around drone office worker Wesley Gibson (James McAvoy.) Like in previous films (Office Space, Fight Club etc) we all know that working in an office and let alone a cubicle is the worst thing in the world. When i'm at work in my cubicle I feel like I should have a mean, scary boss yelling at me to do some work, but that’s not an everyday occurrence around here like it is in Wesley’s world. He gets anxiety attacks and nearly reaches for his medication on an hourly basis. That is until he’s nearly assassinated by some creepy guy in the pharmacy and new mommy Angelina Jolie saves his pathetic life.

Angie says she’s part of a group of assassins that want to recruit Wesley because Wesley’s father (whom he never new) was a famous assassin who has just been murdered. And wouldn’t you know that having anxiety attacks on a regular basis makes for great assassin skills. His heart rate climbs to such a high rate that it nearly slows down time around him and he can become extremely aware of his surroundings. In fact, he has the skills to shoot the wings off a few pesky houseflies. The first part of the film is learning about Wesley’s dismal life, the second half is his training once he decides becoming an assassin is much better than being a cube monkey (it also doesn’t help that his pesky co-worker is sleeping with his girlfriend during their lunch breaks). The third part of the film is standard plot stuff which I won’t get in to but if you’ve seen the movie feel free to discuss your thoughts with me.

Let me just say this. If you haven’t gotten it by now this movie is RIDCULOUS. (And I’m not even going to mention the “Loom of Fate”) I blame/praise mostly director Timur Bekmambetov (say that five times fast) because he makes this movie completely worth watching. People do things that are not possible in real life, like jumping out of a glass window and going really, really far before finally falling to your death. And I mention the whole “curve the bullet” thing, in which with a flick of the wrist a bullet fly through the air in a nice rounded path. And let’s not forget that bullet that Angie shoots at the end of the movie that travels in a complete circle. Totally preposterous. But undeniably fun. I mean Angie drives a car into a moving train. (And that’s after she drives the car while laying on its hood while shooting a gun and steering with her feet) That’s one way to get on if you’re running late. But the movie is really all about the little things. When Wesley actually grows a pair and smacks his office pal in the face with his computer keyboard (for sleeping around with his girl remember) the some of the keys fly toward the camera in slow motion and spell out F*** You. Priceless.

This movie has such a fast past that you hardly have time to realize how actually unfathomable it all is. How many times did my friend and I look at each other, roll our eyes, and then totally laugh in excitement. We were totally enjoying ourselves because the film has a style and a tempo that has nearly outmatched much of the movies that have been released so far this summer. This movie has frenetic pace that never feels mind numbing or boring. Speed Racer was mind numbing and boring. But here, you might actually give a damn. And speaking of which, I’d be lying if I said I didn’t care for McAvoy’s character. He feels like the guy you know a few cubes down who could use a hug every now and then.

Those looking for a little cuckoo with their Cocoa Cocoa Puffs need look no further. GRADE: A-