The 40-Year-Old Vermin: Boys Will Be Boys in the Silly, But Funny “Step Brothers” 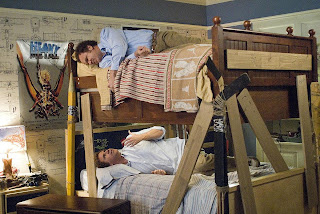 I still live in my parents’ house. Fine! I just admitted it. I am 25 and I still reside with the people who gave me life. But you know what? I think I’m doing just fine. I have a job, I buy my own stuff, pay my own bills and can pretty much take care of myself. But when your parents’ house is a four minute commute to work, it’s sort of hard to move farther away. So having said that I can safely say I am 345465 times more successful than the duo that is Brennan and Dale (as are about 98.9% of the American population) played with buffoonish tomfoolery by eternal man-boys Will Ferrell and John C. Reilly (who is, by the way, a former Oscar nominee for anyone keeping track).

You see they are 40ish men who are still living at home. They don’t have jobs and pretty much can’t take care of themselves. Not so much because they are mentally challenged (see The Other Sister for that story) but because they are a product of not so rough love by their parents. Nancy (Mary Steenburgen) loves her son Brennan but realizes her divorce has been hard on him, so she takes care of him. Robert loves his son Dale but realizes his wife’s death has been hard on him, so he takes care of him. When they meet and fall in love and decide to get married they move in together, which means Brennan and Dale are now step brothers.

This is basically the plot of the film At first Brennan and Dale are like two cats in a bag. They HATE each other for no real reason except that they are man-boys remember and act like eight year olds and don’t want each other stepping on their turf. Being forced to share a room obviously doesn’t help. But once they realize they both have the same favorite dinosaur and would both bang John Stamos if they had to they become BFFs. What follows is a comedic romp, which sort of plays like a really extended YouTube video that would be passed around through work email, in which Brennan and Dale deal with being brothers and having to YIKES move out on their own when mommy and daddy plan on selling the house and sailing around the world.

The main reason to watch this silly movie is for the inspired silliness that Ferrell and Reilly command. They take silliness to new heights. Unbeknownst to most people, comedy is actually something that is relatively difficult, which is why you get so many of the same stupid “comedies” churned out month after month. But when a good one comes along everything sort of clicks. “Step Brothers” is brought to us by Adam McKay and Ferrell who also gave us Talladega Nights and Anchorman, and for those bloggers out there “The Landlord.”

"Step Brothers" isn’t as funny or as polished as say, something like Superbad or Knocked Up or The 40 Year Old Virgin or even Forgetting Sarah Marshall, which remains the funniest film so far this year (although at least the magic words known as Judd. and Apatow. are firmly displayed in the credits). But you could do a lot worse than Step Brothers. Like most of the movies I go to see, for get to make sense of any of this and just enjoy the nonsense. GRADE: B
PS - I have no idea who Kathryn Hahn is (she plays Brennan's sister in law who has the hots for Dale) but she is a hysterical scene stealer and I look forward to seeing her in other films.

Bought a nest of tables a few days ago and they are extremely practical,
keep making use of the tiniest table for a notebook computer table while
in bed!