Enemy of the State: Shia LeBeouf Runs, Jumps and Grows a Beard in “Eagle Eye” 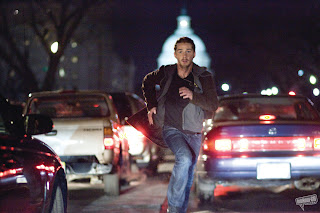 Watching the completely illogical and implausible film “Eagle Eye,” I was reminded of another techno-thriller called “Live Free or Die Hard.” Both have similar elements (technology is not only our enemy but is frigging everywhere). Both have illogical stories and lots of mindless action and things getting blown up and “normal” people getting caught up in ridiculous situations for the sake of the audience’s entertainment. "Live Free or Die Hard," however ridiculous it was, was still a movie that you bought into mostly because it didn’t take itself too seriously, and Bruce Willis really pulls off the whole action hero thing well. I wish I could say the same for Shia LeBeouf in "Eagle Eye." The film is so ludicrous and implausible that we spend more time slapping our foreheads than gripping the armrest.

If you want a thorough explanation of the plot then go to Wikipedia. I seriously had no idea what was really going most of the time watching this film. The film begins somewhere in the Middle East and has to do with an assassination of some sorts. Then we’re introduced to Jerry who is a twenty-something kid who just learns that his twin brother was killed. A short time later there is an exorbitant amount of money in his bank account and mysterious boxes are delivered to his apartment. He gets a call from an unknown voice telling him to leave his apartment because he’s about to be arrested. Before you can say “Holy crap, why is someone who sounds like Julianne Moore calling my cell” Jerry’s being arrested by the FBI. He’s questioned by Agent Billy Bob Thorton, who looks like he’s either been airbrushed or just has really, really smooth skin for a guy in his 50s.

Meanwhile divorced mother of one Rachael (Michelle Monaghan) gets a phone call from “the voice” who says that her son, who she just put on a train for a class trip to D.C., is going to be harmed unless she follows the directions she is given. Our hapless (and seriously confused) heroes meet up in a car and question each other about what the heck is going on. This is followed by chase after chase, action sequence after action sequence. And there are lots of quick edits. The film could basically be the illegitimate love child of Michael Bay and Tony Scott. I normally wouldn’t mind action sequence after action sequence if I actually cared enough (or actually had a clue) about what was going on. Monaghan and LeBeouf are likable actors in likeable roles, but I didn’t really care about them a whole bunch. In fact, they escaped so many implausible situations that I basically wanted to throw up my hands and just say “are they superhuman or something!?” (And don’t even get me started on the whole “secret floor of the Pentagon” sequences with Rosario Dawson and Michael Chiklis. You’ll laugh in spite of the fact that you paid money to witness all of this).

"Eagle Eye" is probably the most expenseive way to get the message across that if we continue to let technology control our lives then it will literally control our lives. If you’re a big fan of mind-numbing action (although the sequences were staged well by “Disturbia” director D.J. Caruso) then "Eagle Eye" is for you. I love me some action but here Eagle Eye just seems to be a conglomerate of parts of better movies. I was excited to see Caruso and LeBeouf’s second pairing and I have to say “Disturbia” was a much more plausible and enjoyable affair. I longed for the intimate and suspenseful atmosphere of that “Rear Window” rip-off rather than the broad action spectacle of this “North by Northwest” rip-off. GRADE: C

You need to take part in a contest for one of the finest websites on the web.

I will recommend this site!

Take a look at my page :: buy african mango