Far From Heaven: Bill Maher is Funny as Hell in “Religulous” 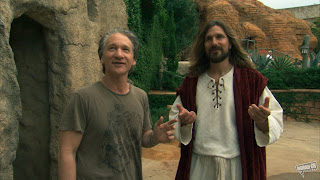 Religion. What is it exactly? It means a lot of different things to different people. To me religion is a cult. It’s a bunch of people afflicted with the same delusional beliefs that if they follow their god’s rules then they will be set for life (aka don’t kill or take the lord’s name in vain and spend eternity in heaven). Every religion is different, but to me they hall have something undeniably the same: religion is a way of running peoples’ lives. Some people are so content with the ways of the Lord that they’re blinded by the wrath of God. I think its obvious that you shouldn’t commit the sin of murder. Any rational human being doesn’t need an ancient book to tell us that. Late night talk show host/comedian doesn’t really believe in any form of religion whether it be Catholicism or Judaism or that weird marijuana religion that we learn about in the Netherlands. “Religulous” mostly consists of Maher just trying to get answers. Why do people follow a certain religion and what’s with all those weird crazy rules.

According to Wikipedia, 85% of North Americans follow some form of religion. That’s a large chunk of the population, yet there are still plenty of people who don’t follow any sort of religion. You can definitely put Maher in that other 15% of the popular. He doesn’t really follow any sort of religion, although he seemed to enjoy that weird marijuana religion I mentioned. You could classify Religious as a documentary in that it’s a non-fiction piece mostly consisting of Maher interviewing various religious people and how their religious work and why they follow a certain savior. Maher easily gets people worked up just by asking questions (which to some religions seems like a major no no). ‘Thou shalt not question religion’ should be the 11th commandment.

The most interesting people that Maher talk to are definitely those devout Christians like the ones who spend their free time reenacting Christ’s crucifixion (with plenty of musical numbers to spare). There’s actually a place in Orlando, Florida called Holy Land. You should check it out in case you ever get bored with Mickey Mouse. Also interesting is how Maher gets kicked out of the Vatican only to encounter a friendly priest nearby who practically denounces God in front of the cameras. He insists modern religious is practically ridiculous will of its crazy rules.

Most funny of all however are those random film clips and TV clips thrown in for good measure. When Maher discusses how we never get to learn about Jesus’ teen years and how he must have been an awkward teen Jew, we cut to “Superbad” star Jonah Hill looking awkward and Jewish. I can’t even imagine how much stock footage from movies, TV and other places are in this film. It really adds to the humor and makes this anything but a stuffy documentary about religion.

Maher intends to be irreverent and controversial (and it helps with “Borat” director Larry Charles at the helm). He doesn’t attack people or force them to think the way he does, but he just wants to know what is going on inside some of those religious freaks we all associate when we hear “let Jesus save you” when we’re walking down the streets of Manhattan. We want to know why it is so important to spread the love of Jesus. We want to know why religion is such an important factor in people’s lives and why we’re such a religious country. Is it possible to have morals without belonging to a religion? I think so. But what do I know? It’s not like I’m God or anything. GRADE: B+

Your website must give a clear message with a
goal-oriented direction, setting you apart from your competition. Each auction might be conducted having a different set of terms
including bid increments, amount of auction rounds and expense
reimbursement for your stalking horse. A well-developed business plan is much like your blueprint
for victory.

We therefore have a total of 6,250 units to cover
an area that originally had 37,500. It is also known as
soft laser, therapeutic laser therapy and low-power laser.
The usual recommended dosage of gotu kola is 600 mg three times a day.

The blog is knowledgeable in which we learn many things about "Religion". Every one have different opinion of religions.

blog is regarding religion but you have your own way to read books aswell that can help
you more but still bogs are important office.com/setup

Here I am for the first time, and I found beneficial information. I am really impressed with the information. I look forward to more comprehensive and insightful posts like this in the future. Keep up the good work. Also, if you want to know about how to transfer Microsoft Office setup to a new PC, then click the link below:
office.com/myaccount | office.com/setup

Thanks for sharing such great information with us. Very nice and well-explained article. If you want to know how to purchase a Microsoft 365 subscription, then visit microsoft365.com/setup