Wedding Bell Blues: You’ll Be Addicted to “Rachel Getting Married” 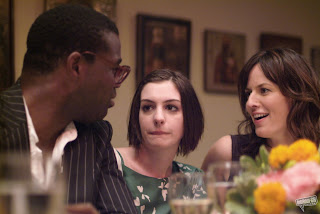 I never though I’d write these words but I will: Anne Hathaway is Oscar-worthy. Yes little Princess Diaries is all grown up and can prove that she can act like a pro. I mean, not to say that she’s never been good or anything, but I figured Hathaway would always be “very good” and not necessarily “show-stopping amazing.” Of course it’s the type of role that gets noticed. In “Rachel Getting Married” she plays a recovering drug addict who is released from rehab for the weekend to attend her sister’s wedding celebration. What results is a weekend of sly one-liners and family secrets that have been simmering for years. This film, directed with a gritty, shockingly realistic style by Silence of the Lambs director Jonathan Demme, is a dark, emotional and ultimately satisfying portrait of a broken family in serious need of a patch job.

I don’t want to spend this entire review raving about Anne Hathaway, but she is really, really good. And she deserves whatever accolades (and shiny gold statues) she may accrue. She shows a sense of vulnerability in her I’ve never seen and there are moments when just her facial expressions say things no dialogue could. Hathaway plays Kym who at the beginning of the film is waiting for a ride home from rehab. At first we’re not sure we don’t know her whole story which is slowly revealed as the film progresses. She’s picked up by her father Paul (Bill Irwin) and stepmother (Anna Deavere Smith). And they arrive at her house where her sister Rachel (Rosemarie DeWitt) and friends and other wedding helpers are preparing for the wedding of a lifetime. It appears that not only is Kym a recovering addict but also seems to be harboring some kind of hurtful secret from her past. She enters what looks like a child’s room and we can tell her past isn’t lollipops and rainbows.

What is so amazing about this film, besides Hathaway and the rest of the talented cast, is the Demme’s cinéma vérité direction, who shoots the film with handheld cameras (and what appears to be High Def video) as if it were a documentary and Jenny Lumet’s script which feels so real you’d swear you were watching a really high budget home movie of your own screwed up family. The camera gives us shots that are sort of ugly in that they instantly reflect the emotions and state of minds of the characters. If you’re looking for epic shots and beautiful vistas, you should be watching “Lawrence of Arabia.” I would never be able to tell this was a Jonathan Demme movie. Even though I’ve only seen “Lambs” and “Philadelphia” he employs a drastically different filmmaking style that is much more anti-Hollywood but fits perfectly with the film’s story. The camerawork sort of makes you feel uneasy as it should.

The past that comes back to haunt the members of this family is truly heartbreaking and everyone does such a great job of portraying true emotions rather than overly dramatic “made-for-TV” melodrama, which this could have easily become. Lumet’s screenplay slowly peels back the frayed layers of a family that I’m not really sure ever was all one solid piece. Kym’s father is divorced from her mother (played here by Debra Winger) and she’s not exactly going to be winning any Mom of the Year awards anytime soon.

I hesitate to mention this film reminded me a lot of the Dogme 95 film “The Celebration” mostly because I doubt you’ve even heard of it, and I hardly enjoyed it, but this is a more tolerable version. I do love movies where unspoken thoughts of a supposedly tight-nit family comes bubbling to the surface and all hell breaks loose. Is it depressing? Sure. Is it sort of hard to watch? Kind of. But it certainly makes for a fascinating movie from beginning to end. GRADE: A

Someone else just told me today to see this movie; I have to check it out!

great submit, very informative. I ponder why the opposite specialists of this
sector do not notice this. You must continue your writing.
I am confident, you have a great readers' base already!