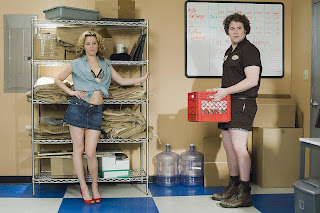 I can recall a couple years back when I watched “Clerks II.” It was a film I wanted to like but didn’t really care for. I haven’t seen it since and I think that might like it a bit more if I saw it again, but still it’s a little too “Kevin Smith” for my tastes. I realize that’s exactly what Kevin Smith fans want in a Kevin Smith movie, but I guess I felt like I wasn’t in on the jokes. Like Sarah Palin, I felt like an outsider even though this maverick filmmaker has such a devoted fan base. Now comes “Zack and Miri Make a Porno” which is sure to please everyone. Die hard Smith fans will enjoy the dirty humor and graphic dialogue and non-Smith fans will appreciate the actual story about two lifelong friends who discover they actually have feelings for each other once they shoot a homemade adult film in order to get money to pay their rent. The film feels more like a Judd Apatow comedy than a true Kevin Smith movie, but you can tell that Smith has matured as a filmmaker and is capable of telling a good story along with filthy, filthy dialogue and plot elements (Fair warning: this movie has porno in the title so why don’t you leave the kiddies at home please).

Judd Apatow all-star Seth Rogen is Zack. Elizabeth Banks is Miri. They live together and they have been best friends since high school. They even attend a 10 year high school reunion mostly to see what has become of their fellow loser classmates. Unfortunately they live in Pennsylvania (a change of location for Smith’s New Jersey-set films) and it’s the dead of winter. That means when their utilities are turned off because they have no money to pay their bills (Zack works at a coffee shop and Miri works at the mall) they realize they might just want their heat, water and electricity back. At their reunion they run into a classmate who now makes adult films (a hysterical Justin Long) and Zack and Miri get the stupendously crazy idea to make their own porno flick to make money so they can actually live like normal human beings.

Kevin Smith has crafted such a wonderfully zany cast of characters for this film. And surprisingly there is a lot of heart here as well. Rogen and Banks have natural chemistry together (and great comedic timing). Those who want to see a dirty Kevin Smith film will be pleased and those wanting to see a story which, stripped bare (pun intended) could easily have been a clichéd “best friends who discover their undenying love for one another” movie but instead it transcends genre conventions to become one of the most funny and touching films with the word porno in its title ever made. GRADE: A-

Note: I viewed this film at a screening during the Woodstock Film Festival on October 5th.