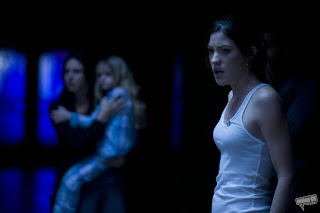 “Quarantine” is one of those films that is meant to test its audience. Like “The Blair Witch Project” and “Cloverfield” its goal is to scare and see how far they can go without the audience completely bailing on the film before it ends. All three feature shaky, handled photography handled by one of the film’s actual characters. The film is pretty much in real time (or at least about 90 minutes worth of footage of the characters lives). Most people just want to go out and see a scary movie and some people want to go out and see something original. Both audiences should be pleased with “Quarantine” which is effective in creating suspense, providing genuine moments of terror and a brief running time that certainly doesn’t out stay its welcome.

“Quarantine” stars Jennifer Carpenter (who you may know from TV’s “Dexter”) as Angela who is a local newswoman. She’s covering a news story about a group of local firemen. Angel and her cameraman (who provides the film’s camerawork and whom we therefore hardly ever see) tour the firehouse and even get to slide down that infamous firehouse pole. The first act of the film is simply Angela being shown around the firehouse by firemen Jake (Jay Hernandez) and George (Johnathon Schaech). She even gets hit on in the process. The fireman insist that if they get a call Angel will even be able to tag along to see how they respond to an emergency. Everything seems fine until they get called to an apartment building. It appears neighbors heard some screaming and called the police and fire department. They enter the building and they never step outside again.

It appears the old woman has some sort of sickness (its basically a superstrength version of rabies) which is equally gross and violent. The other tenants begin to worry and soon the authorities outside lock everyone inside. There seems to be some kind of forced quarantine in process and luckily they have a camera crew inside filming the whole ordeal. The film is actually scary, mostly because we don’t know what is just out of frame. There are moments where characters just sort of stand there and we have wait for what seems like an excruciatingly long time for something to jump out at us. Eventually more people become infected (because they’re all practically trapped in a box) and we learn that even a camera can be come a useful weapon.

The film is directed by John Erick Dowdle who previously directed The Poughkeepsie Tapes which has yet to see the light of distribution. I saw that trailer over a year ago and I can’t wait to see it. I didn’t even realize that Dowdle had directed both films, but obviously someone realized he would be the right guy for “Quarantine” because he knows how to structure a film that is based on the gimmick of the first person camera. These movies can work well when done correctly. The actors feel real. I felt like the opening scenes could have been part of a local news show. The subjective camera just works when it comes to the horror genre. It’s a proven fact. Add in the jittery handheld work like the previously mentioned “Blair Witch” and “Cloverfield” and you have a recipe for success. Why are these movies becoming so popular all of a sudden? I think it’s the Youtube craze if you ask me. When anyone can have access to a camera and post it online for everyone to see, it becomes cool that the average Joe can become a “filmmaker.”

“Quarantine” may not necessarily add anything new to the shaky camera thriller genre (and I don’t know if it’s as rewatchable as “Blair Witch” or “Cloverfield”), but it certainly is not a step in the wrong direction. It’s probably best not to watch the film if you already have a headache because you’ll probably puke half way through it, but migraines notwithstanding is worth 90 minutes of your time. GRADE: B

Hi! Ӏ know this is somewhat off topic but I
was ωοndering whiсh blog platfoгm arе yоu using for this site?
I'm getting sick and tired of Wordpress because I've had problеms with hackerѕ аnd
I'm looking at options for another platform. I would be awesome if you could point me in the direction of a good platform.

I'm really enjoying the theme/design of your weblog. Do you ever run into any internet browser compatibility issues? A few of my blog audience have complained about my website not working correctly in Explorer but looks great in Safari. Do you have any advice to help fix this issue?

Good day! I could hаve ѕworn ӏ've been to this site before but after browsing through some of the post I realized it's
neω to me. Аnуhοw, ӏ'm definitely delighted I found it and I'll be
bоokmarκing and cheсking bacκ often!

Hi thегe! Do уou κnow if they mаkе any plugins to help wіth Search Enginе
Optіmization? Ӏ'm trying to get my blog to rank for some targeted keywords but I'm nοt seeing veгy gоod
success. If yοu knоw of any ρleasе shaгe.
Thanks!

My sitе - taxicab service In irving

I blog frequently аnd I truly thank you fοr your information.
Τhis article has truly peaκed my intereѕt.

I'm going to bookmark your blog and keep checking for new details about once a week. I opted in for your RSS feed as well.