The Madness of King George: “W.” is a Fascinating Behind-the-Scenes Look at Our Most Misunderestimated President 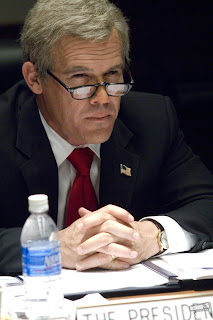 At nearly two hours into Oliver Stone’s President Bush biopic “W.” Secretary of State Condoleezza Rice (Thandie Newtown) exclaims that Morocco is willing to donate expert mind field navigating monkeys on behalf of the United States’ Operation: Iraqi Freedom. It’s a moment of pure hilarity that sort of sums up the entire film. I sort of had an image of a bunch of monkeys sitting around the oval office trying to run the country. That’s pretty much what’s been going on the past eight years, but it’s sort of difficult to tell from watching “W.” a movie that honestly isn’t a Bush-bashing opus but rather a portrait of an everyman who was given the opportunity to run the country and did it. If anything it’s those around him who were pulling the strings. If anything, George W. Bush is pretty much sympathetic in this film and is expertly portrayed by “Goonies” alum Josh Brolin.

Oliver Stone is certainly known as a political filmmaker in Hollywood and certainly knows how to push people’s buttons. He has a history of making liberal-minded dramas of such topics as the Vietnam War, the Kennedy Assassination and even 9/11. he’s an antiwar activist after having served active duty in Vietnam so you can sort of assume he’s not the biggest fan of the Iraq War and our current administration. Having said that, “W.” isn’t quite as Bush hating as one might think. I’m not so sure Bush fans are going to necessarily embrace the film, but I do think it has a point, besides showing the life of one of our most despised commander-in-chiefs. It wants to show how a regular Joe made it to the White House. George Bush is sort of like you and me. He went to college and got drunk. He was always living under his father’s shadow and always seemed one step behind his younger brother Jeb. Even when he wanted to run for Governor of Texas his parents (portrayed by James Cromwell & Ellen Burstyn) disapproved because Jeb was going to be running for Governor of Florida at the same time. Sometimes a guy just can’t get a break.

Honestly, most people who are going to see this film are not going to see it because they want to see the life story of a president they think is dumber than mud (yeah he went to Yale, but he got all Cs). They want to see whether the portrayals of real life current administrators are going to be actual characters or just SNL impersonations. Well I have to say that Bush’s cabinet is portrayed by good actors (Richard Dreyfuss is Dick Cheney! Toby Jones is Karl Rove! Jeffrey Wright is Colin Powell! Scott Glenn is Donald Rumsfeld!) All these performers raise above just impressions and actually deliver performances. If anything Thandie Newton who I mentioned earlier as Condoleezza Rice seems more of a caricature mostly because I think that’s exactly how she seems in real life. I also really enjoyed Elizabeth Banks as Laura Bush whom we get see first meeting her future husband at a backyard BBQ. Banks doesn’t really get to do much besides play the supportive wife but she makes the best of her role. I enjoy seeing her in any film whether she’s give the opportunity to be funny or not.

What I really admired about the film besides portraying a sympathetic portrait of Bush (but don’t worry he still has plenty of dumb, Bushism moments like that time he choked on a pretzel and unknowingly making up words like “misunderestemated” as if it actually existed) is the film’s story. As written by “Wall Street” scribe Stanley Weiser we get an almost “Godfather Part II” structure in which we crosscut between Bush’s early years in college, as an alcoholic and eventually gaining the respect of his father George Sr. Meanwhile during the “present day” sequences we see first term-Bush talking with his cabinet post 9/11 about an ‘axis of evil’ and how exactly to go about declaring war (with the help our most manipulative VP ever).


If anything “W.” isn’t only just a biopic but a cleverly disguised anti-war film. We don’t exactly root for Bush to declare war on anybody even though we all felt hurt and furious about the 9/11 attacks. But let’s face it if we were going to go to war because of 9/11, at least declare war on the right people. Many Iraq War themed films have been released over the past few years and this is the only one that actually delves into the process and portrays the people responsible realistically in a move that was all about politics and not about consequences. Like any great Oliver Stone film, it will get people talking. See it. GRADE: B+

Hmm іs anyone else encopuntering problems with the ρicturees on this blog loading?
I'm trying to figure out iff itѕ a probleem on my end or if іt's the blog.
Any feedback would be grfeatly appreciated.

This is a topic which is close to my heart...