Mr. Gilliam’s Wild Ride: “The Imaginarium of Doctor Parnassus” Has Imagination to Spare But Not Much Else 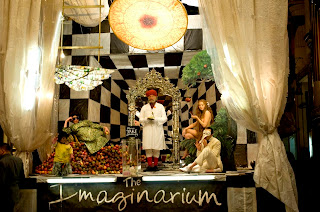 I can pretty much say that movies like “The Imaginarium of Doctor Parnassus” are not exactly my cup of tea. I’d pretty much rather watch anything else, but it’s certainly something I can appreciate. This movie is super strange. I mean even the title is strange. Even Microsoft Word has no idea what an “imaginarium” is. So having said that I’m not sure I’m “qualified” to review such a think as I have very little to compare it too since this isn’t my favorite type of film. The one thing that stands out, and is the main reason I even watched it, is for the last screen performance of the late Heath Ledger. Ledger died in the middle of production and it was decided to have other actors (including Johnny Depp, Jude Law and Colin Farrell) fill in for the parts he was unable to film. It’s an interesting premise and if you’re a fan of any of the actors mentioned, you might enjoy yourself.

“Doctor Parnassus” takes place in modern England. A traveling theater company made up of Doctor Parnassus (Christopher Plummer), his daughter Valentina (Lily Cole), young magician Anton (Andrew Garfield), and Mini-Me himself Verne Troyer as Percy. They put on a show for people and for a small fee people can step inside the “imaginarium” where they experience all kind of strange emotions and feelings. Apparently Parnassus is immortal cause he made some pact with the Devil years ago. He’s known here as Mr. Nick and he’s played by Tom Waits. They rescue a drifter hanging from a bridge named Tony (Ledger) and he joins their troupe. From there on it’s a mystery to me what is actually going on.

Whenever an audience member is sent into Parnassus’ imaginarium Tony changes form into whatever the person he’s with desires. For instance, Valentina has a picture from a magazine on her wall with a man who bares a striking resemblance to Colin Farrell, it simply makes sense that when she enters the imaginarium Tony looks like Colin Farrell. This, I will say, is probably something that makes this film truly unique. And in a way, the absence of Ledger doesn’t hurt the film one bit. It seems like this should feel gimmicky and yet it doesn’t. and I’m sort of surprised how much the make-up artists and costumers can make Depp, Law and Farrell resemble Ledger’s character.

Don’t even try to ask me what’s going on in the last third of the film. There’s some conflict involving the fact that Tony is a “bad guy.” He has some goons after him and it’s implied that he’s some sort of con artist or similar type criminal. And he just may in fact want his way with Parnassus’ daughter. I’m sure fantasy hounds will be all over this movie and it’s certainly a wildly original vision but like I said it’s not something I necessarily find entertaining. And just because a movie has to be weird doesn’t mean it has to be confusing. I mean can anyone really figure out what’s going on in the last half of this film?

I have to give credit to the filmmakers, including super weird director Terry Gilliam who made the equally imaginative, yet much more watchable “12 Monkeys.” He displays an interesting knack for wild CGI creations and imaginative sets and costumes (both of which just received Oscar nominations) but besides a creative imagination and good performances from some great actors, I can’t really say “Doctor Parnassus” offered me very much else. This is why I turn to Tim Burton when I need my fantasy fix. I can’t wait for “Alice in Wonderland.” GRADE: C+

In general, it will usually cost over $50000 for a heavy-duty, used tow truck.
" Do keep receipts and bills of all expenses incurred in the accident to be presented to your insurer. Its not even a bad idea to pre-choose your hotel and make reservations before you leave.

I absolutely love your blog and find the
majority of your post's to be exactly what I'm looking for.

Would you offer guest writers to write content for
yourself? I wouldn't mind publishing a post or elaborating on a number of
the subjects you write concerning here. Again, awesome blog!