Too Cool for Shul: The Coen Brothers’ “A Serious Man” is Seriously Strange 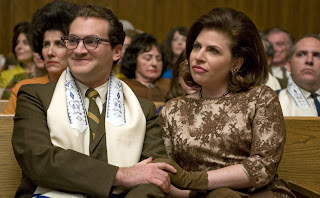 I am not Jewish. Therefore I feel like I can say that I don’t understand 90% of Joel and Ethan Coen’s film “A Serious Man.” Parts of the film are spoken in Hebrew and Yiddish and while there are subtitles it would have been nice to have subtitles that describe what the heck is going on. But I do sometimes get the Jewish jokes in other movies, after all I am a big Woody Allen fan, but for some reason too much of “A Serious Man” went seriously over my head. I am serious and don’t call me Shirley.

“A Serious Man” is loosely based on the Book of Job from that book known as the Bible. So automatically this stuff is over my head. Maybe I’m not the best person to review this movie. I think it’s cool that the Coens can find a way to use that text as inspiration for a completely original film. After all they are the ones who received a Best Adapted Screenplay Oscar nomination for “O, Brother Where Art Thou” which was based on Homer’s “The Odyssey.” “A Serious Man” follows Jewish family man Larry Gopnick (Michael Stuhlbarg) right as his light is falling apart. His wife wants a divorce and his brother has moved in with them and has been exceptionally annoying. Apparently his only hope is trying get help from various rabis.

Oy vey. I do remember laughing during this movie, but I’m not really sure I remember what exactly I laughed at. The Coens have a very specific sense of humor, which I understand for the most part. After all I really enjoyed that last comedic effort “Burn After Reading.” They do seem to get pleasure in creating dire situations for their protagonist. But then again that’s something that can be seen in all of their films. Knowing the original Book of Job text helps. I’m told it’s basically the story of this guy named Job who has everything and the Devil says to God that the only reason Job cares about God so much is because his life is so great. So God takes away all of Job’s good stuff (aka kills his children and animals) to prove that even though Job has nothing left he’ll still be faithful to the lord almighty. Or something like that.

“A Serious Man” while confusing and at times distancing works because of Stuhlbarg’s performance. Unfortunately I think he’s number 6 in the Best Actor rankings, which is unfortunate but he’s very good here. I enjoyed the 1960s period design that actually seems pretty legit. And Carter Burwell adds another interesting score to his repertoire.

I guess I just want to say that I’m not exactly the target audience for this film. I really know nothing of the Jewish culture and there are other people who will appreciate it a lot more than me. And like any good Coen brothers movie the film just ends without any explana GRADE: B-

Nothing about the motivations or backgrounds of a large number
of characters is adequately explained except in a hard to find guide.
Impostor is a digital Proteus who changes his persona whenever it suits his purposes.

Sadly, many netizens who survive a Godzilla attack will become Xenophobes.


Here is my web page; the most popular monster legends hack