Far From Heaven: Peter Jackson’s “The Lovely Bones” is a Tonally Uneven Film 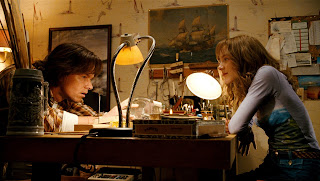 So the long-awaited film adaptation of “The Lovely Bones” is in theaters and I have to say that’s it is not as horrendous as most film critics would have you believe. It is however full of flaws. I wouldn’t call it deplorable as Roger Ebert puts it. I mean the film is a difficult one and that’s mostly because of the disturbing subject matter. But if so many people love the book so much, I can’t really see why the movie is any different. I guess some books should just stay books?

Coincidentally I think Peter Jackson, who is known for his wild imagination and putting fantastical images on screen, makes the mistake of making the film too fantastical. The story involves the rape and murder of a teenage girl named Susie Salmon (played well by former Oscar-nominee Saoirse Ronan) who is sent to an “inbetween” world. It’s not quite heaven but there’s lots of colors and magical things going on there. And she can somehow look down at what’s going on with her family in the real world where her father becomes obsessed with tracking down the person who killed her. I felt bad thinking that this story would of worked better as a made-for-TV movie rather than a big budget fantasy directed by the guy who made “The Lord of the Rings.” It seems odd that after being raped and murder Susie would be sent to this “magical place” where she’s free to do what she wants. I guess it’s a pretty good parting gift for being raped and murdered. Although I mean what do you want really? Would have it been better if after being raped and murdered she was sent to hell or some evil, scary place?

Probably the best thing going for “The Lovely Bones” is its cast and their wonderful performances. Ronan is great as Susie and she’s on track to be one of Hollywood’s most talented young stars. Mark Wahlberg plays Susie’s dad and he’s very good, however he still seems a little young to have a teenage daughter. But that’s more of the casting director’s fault than his. I don’t care if he is turning 40 next year. Rachel Weisz, who stole the Oscar from Amy Adams way back in 2005, does a good job portraying a grief stricken mother. But I think that’s still Acting 101. Susan Sarandon gives a great performance as Susie’s wise-cracking, booze loving grandmother. However her character was definitely in another movie entirely. And probably the standout is Stanley Tucci as the killer. He is chilling and disturbing and he deserves to be the film’s only Oscar nomination come February 2nd.

I want to assume that fans of the novel will enjoy the film if only because they enjoyed this story in the first place. If you’re one who likes reading the misadventures of a raped and murdered girl be my guest. I wonder if the book is mismash of genres the way the film is. There are funny parts and there are dark and serious parts. It seems like this is a film that would appeal more to women, yet it almost seems to cry out for fanboys to love it since their God Peter Jackson is behind the camera. The film simply works better when the screenplay (written by Jackson, Fran Walsh and Philippa Boyens) focuses on the stuff going in the real world. However, since we know who the killer is initially there really isn’t that much room for suspense, save for a scene towards the end which is pretty tense.

Overall the film is just sort of awkward. I wouldn’t call it horrible and it’s a far cry from a masterpiece. I’ll file it under disappointment. When its trailer was release months ago I would have bet you that it would be the Best Picture frontrunner. It’s too bad because I think everyone gave it their all, but sometimes things just don’t work out the way they should. GRADE: C+

'It's hard, especially if you're trying to do it through dialogue and story,' Lindley said when asked how hard it to convey humor
in a game. Abandoned Mineshafts - Just as the name suggests, these are mines pre-carved
into the game world and they can stretch for miles in all different directions to create a maze
and intersect with ravines and caves. So, that's about
all you need to know to get yourself started playing Dungeons and Dragons with a group.