If I Had an Oscar Ballot... 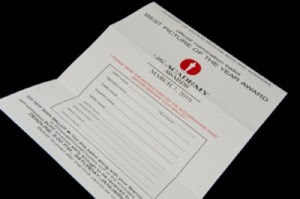 It’s every movie freak’s dream to be able to vote for the Oscars (or am I alone here?) But a fan can dream right? So here would be my picks if I had an Oscar ballot in front of me:

Ranking of Best Picture
With 10 nominees for best picture, Academy members are actually required to rank all the films from their favorite to least favorite. They use a preferential voting system to find a winner, which is way too complicated to explain here, but I understand the general gist of it. At the end of the day each member will end up casting only one vote for one movie, but it may not necessarily be the top movie on their ballot. Here are my rankings:

This year, I actually enjoyed all ten best picture nominees. (Although I’d prefer to have The Town in there somewhere). I didn’t dislike any of the movies, and although I have The Social Network ranked last, it’s not a horrible movie by any stretch of the imagination, it’s just that, I wouldn’t want my ballot being unexpectedly cast for that film. 127 Hours was hands down my favorite film of the year.

And the rest… my picks are italicized…

I loved David O. Russell’s work on The Fighter, it’s quite understated and it’s not as flashy a job as let’s say Black Swan, although Darren Aronofksy is pretty close second here. I would vote for David Fincher just because I’d want him to win an Oscar, but to be frank if he was going to win, he should have won for Seven, Fight Club, Panic Room, Zodiac or Benjamin Button over The Social Network.

James Franco’s performance is the default winner here just because of the level of difficulty. He spends the entire film pined to a wall and yet he’s so compelling, likable and heart-wrenching the man deserves more than he’s been given so far this award season.

Who doesn’t love Christina Bale, but here we have a chance to vote for not only a great actor who’s shockingly never been nominated, but actually rewarding him for literally his best performance to date. Although I do love Renner and Ruffalo, and even Rush was great but he’s won before. Hawkes’ nomination is his reward.

This is a tough call. I would hate voting for someone as a make-up vote for not winning previously, but I can’t help myself here. Bening was so great in American Beauty and Hilary Swank had to swipe it from her (twice). It’s really impossible to compare Bening and Portman’s performances but they were but equally great. Bening has the edge.

Same thing here with Adams and Leo. They were both awesome in The Fighter, but in the end I have to give Adams the edge because she lost out on her magnificent performance in Junebug (and she wasn’t even nominated for Enchanted).

I think it’s possible that some Academy members will vote for Inception here simply because Christopher Nolan was snubbed because the Director’s Branch made a big mistake (yet again). However it deserves to win simply on the account that it’s not only the MOST original script of the year, it’s also the most fascinating, complex and memorable. Although I’m glad The Kids Are All Right and The Fighter are nominees. 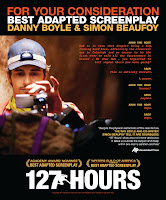 127 Hours just simply shines amongst all of these worthy nominees. I wish The Town was competing but you can’t have everything. On a side note, the book that was adapted into the Social Network, The Accidental Billionaires, is a great read and might even be more fascinating than the movie itself.

I haven’t seen this category’s annual “foreign and or weird/arty” nominee The Illusionist, but I imagine I wouldn’t like it as much as Toy Story 3 or How to Train Your Dragon. In a way I almost want to vote for Dragon simply because Pixar dominates this category way too often and Cars didn’t even win, for shame!

I’m admitting right now that I haven’t even seen ANY of these movies. But I plan on watching Exit Through the Gift Shop at some point, so it gets my vote simply to see what would happen if Banksy actually became an Oscar winner.

The only one of these film I’ve seen this year is Dogtooth, so technically I wouldn’t even be allowed to vote according to Academy’s rules, but since this is pure fantasy, I will give my vote to what is probably one of the strangest films nominated this year. A film full of incest, shocking violence and bizarre behavior that certainly has zero chances of actually winning. Oh those Greeks!

Tim Burton films tend to get recognized a lot in this category and that’s completely justified. Alice in Wonderland wasn’t exactly my favorite of his films and although the production design was great, the jaw-dropping scenery in Inception gets my vote here.

I’m not completely excited about any of the nominees this year. Nothing will beat 2007 as THE year for outstanding cinematography. Don’t believe me, go look it up and tell me that not every one of those films looks simply scrumdiddlyumptious. I still can’t believe Roger Deakins doesn’t have an Oscar, so he definitely gets my vote. And there are some beautiful shots in True Grit to be sure.

Alice in Wonderland is full of bright colors and some rather eye-popping wardrobes.

I’m not sure I can’t still wrap my head around the fact that Inception is not one of the five best edited movies of the year. I expected it to win and it’s not even nominated! So then I must default to my favorite film of the year (because editing and picture sort of go hand in hand) and it actually features some great editing.

BEST MAKEUP
Barney’s Version
The Way Back
The Wolfman

I would love it if The Wolf man actually won because it would be first flat-out horror film to win this category since 1992 (Bram Stoker’s Dracula). Rick Baker is one of Hollywood’s greatest icons having won plenty of times before and certainly deserves another. The work in The Way Back is memorable if not completely flashy.

My one vote for The Social Network is proudly cast here with its innovative and completely wonderful sounding score. This is a great slate of films this year, with Inception or How to Train Your Dragon easily getting my vote in another other year.

This category is pretty weak this year; all of the songs are kind of just ehh. Having said that, I’d love to see Alan Menken and a Disney ‘toon win again. Menken, who used to dominate this category hasn’t won since 1995 (for Pocahontas).

The sound categories usually go with the loudest movie and since the loudest movie is also one of the best Inception is an easy choice. Although I’d love to cast a vote for Unstoppable here. Rememebr this category is essentially "best sound effects" so either film would be a viable option.

Inception’s sound like is visuals are simply dazzling. The mix of score and sound is wondrous. This movie deserves to win just for those loud BURRNNNNNN sounds alone.

No other movie made audience’s jaws drop like Inception. There are so many cool visual tricks here it’s hard to vote for anything else. Although so many of the trickery weren’t even computer-generated, which is cool, so for shear number of wacky CGI visuals Alice in Wonderland isn’t a shabby choice either.