She’s a Maniac, Maniac! “The Roommate” is Mostly Devoid of Chills, but Heavy on Trashy Fun 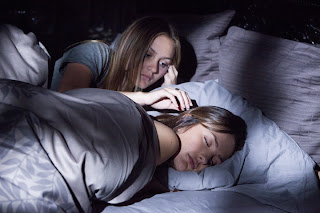 “I just wanna be your friend.”

It’s the beginning of February and I’ve just seen a 2011 film. And it’s a the dopey but fun “The Roommate.” Shockingly it was hard to find anyone to accompany to this film and that’s most likely because it’s pretty much garbage. However, it’s entertaining garbage. Sure it’s a complete rip-off of “Single White Female” (a film that isn’t exactly any more esteemed than this flick) and is a breeding ground for every thriller cliché known to man, but it was enjoyable in a turn of your brain sort of way. I was never bored during its 93 minute run and that’s probably because I amuse easily.

Leighton Meester who you all know all the fabulous Blair Waldorf from TV’s “Gossip Girl” plays a psychopath who is supposed to freak out her straight-laced college roommate but she doesn’t really seem to notice until the third act. Sarah Matthews like all of us have been is a college freshman. She enters her dorm room on the campus of the University of Los Angeles with about two bags (riiiight) and doesn’t meet her roommate until the next day when she wakes up with a huge hangover. Her roommate is Rebecca (Meester) who seems like such a sweet normal girl. But she’s not. She’s a bipolar manic depressive whacko! Although Sarah never seems to realize how crazy she is. The two become good friends at first, almost like sisters, but she get jealous easily and won't let anyone stand in the way of their friendship. This includes a slutty girl (Alyson Michalka) and Sarah’s new boyfriend Stephen (Cam Gigandet).

Nothing that happens in “The Roommate” is particularly original, but since this is a psycho-stalker movie in the vein of Fatal Attraction, Single White Female and One Hour Photo, I’m not going to dismiss this movie because let’s face it, it’s not “Casablanca.” Sure in this film they two girls adopt a pet kitty, which ends up in a clothes dryer. In Single White Female, a puppy falls to his death. Here, Rebecca gets the same tattoo that Sarah has and she even poses as her and fools her ex-boyfriend, which is similar to “Female.” This all culminates and a wickedly fun final act catfight that the audience has been waiting for. And say what you want about the film, I actually enjoyed Meester’s performance. It was nice to see her in a different vein from what we’re used to seeing her as every week on TV.

“The Roommate” adds nothing new to cinema and it’s pretty much everything you’ve seen before. It’s the standard PG-13 rated thriller that is made to rip-off unsuspecting teenagers. Sort of like “The Stepfather” last year, which I also enjoyed. If you find yourself a fan of trashy thrillers with hardly any cinematic merit, than “The Roommate” is certainly for you, all others, the art house theater is down the block. GRADE: B

Hiya! Quick question that's entirely off topic. Do you know how
to make your site mobile friendly? My blog looks weird
when viewing from my iphone. I'm trying to find a
template or plugin that might be able to resolve this issue.
If you have any suggestions, please share. Cheers!

Way cool! Some extremely valid points! I appreciate you writing this write-up and also
tthe rest of the site is extremely good.