Oscar Forecast 2011: “The King’s Speech” with a Chance of Facebook 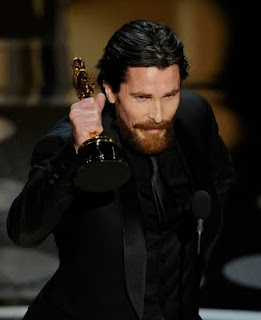 UPDATED - The Oscars are over already?? In the words of Melissa Leo: "F***!" Well what do you know the Academy wasn't as into The King's Speech as most people thought. So you all need to chill alright. Inception ended up winning just as many awards as "Speech" with four wins apeice. And who knew that Inception would (deservedly) take home Best Cinematography? (Poor Roger Deakins!) And even though The King's Speech was a British period piece, it followed the same exact winning pattern as recent gritty flicks like Million Dollar Baby, The Departed, and No Country For Old Men who all won 4 big Oscars and no technical honors. I'm glad Christian Bale finally has an Oscar and thank godness The Social Network won its most deserved win: Original Score. I'm saddened the Academy couldn't find a place to reward 127 Hours, but that's ok. They couldn't even find room to honor True Grit, which turned out to be this year's Gangs of New York with 10 losses. Ouch. Overall it was an entertaining show and James and Anne did good as first time hosts. I'm sure they'll be criticized in the morning (ie "well they're no Bob Hope or Billy Crystal" But who is anyways?) but they should be proud of their performances. I did decently with my predictions, with a total of 18 out of 24 correct categories. Only 364 days til next year's Oscars.... can't wait! Winners are below in BOLD 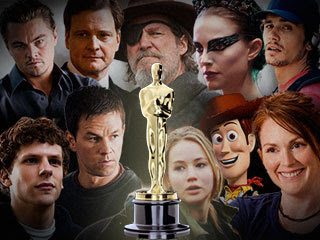 In less than 127 hours, the Academy of Motion Picture Arts and Sciences will announce the winners of the 83rd Annual Academy Awards. It’s been a long awards season but the big night is finally here! I think it’s been a pretty decent year for movies, there are some really great achievements out there. (What? No nominations for Piranha 3D?? It’s a Weinstein film for crying out loud!) This is a year in which I actually at least liked all of the Best Picture nominees and there have been years where I’ve only liked two or three. This is the second year of the Academy’s controversial decision to expand the Best Picture race to 10 nominees and while it’s great to see movies like 127 Hours and Toy Story 3 nominated for Best Picture, let’s be frank: they have ZERO chance of actually taking the top prize. I’m pretty confident that if there were only five nominees they would be The King’s Speech, The Social Network, The Fighter, True Grit and probably Black Swan (with a possibility of The Kids Are All Right). And even with five nominees it would still come down to a battle between a nerdy computer guy and a stuttering monarch. So will the Academy friend The Social Network or will they crown The King’s Speech? Without further ado I present my fearless predictions for the 2011 Academy Awards…

Best Picture
WhatWill Win: The King’s Speech. Do I really need to tell you this? Sure The Social Network seemed like a foregone conclusion a few months ago, but the tides certainly changed over there in crazy Hollywood. With the Weinsteins backing your film about a king with a speech impediment you might as well have given them the Oscar during pre-production. I guess there’s still a remote possibility that The Social Network could win, but I doubt it. The King’s Speech has SAG, PGA and DGA awards to back up it’s claim as the frontrunner.
What Should Win: 127 Hours. Hands down the best movie of the year. Emotionally raw, unnerving, majestic yet intimate, disturbing. Everything you want in a well-made film. Audacious filmmaking for sure.
Should Have Been Nominated: The Town

Best Director
Will Win: Tom Hooper, The King’s Speech. Finally we have a race! Hooper could easily loose here to David Fincher, who seems to be this year’s “veteran” who hasn’t yet won. Hooper has history on his side since he picked up the DGA award and his film is the frontrunner for BP. But a split is definitely possible, and I wouldn’t be surprised or shocked to hear Fincher’s name called. I just think the Academy loves The King’s Speech and what’s a best picture without a best director?
Should Win: David O. Russell, The Fighter. I loved The Fighter and I think a lot of its success is due to Russell’s great direction. He directed his actors wonderfully and they all delivered (with three of them being Oscar-nominated). But if I really had my pick I would vote for…
Should Have Been Nominated: Danny Boyle, 127 Hours

Best Actor
Will Win: Colin Firth, The King’s Speech. Like last year’s “race,” yawn. You don't need a pre-cog to see this one coming.
Should Win: James Franco, 127 Hours. This movie is practically a one man show. And he didn’t even talk to a volleyball! Franco’s performance is wonderful and even though he doesn’t stutter once, you are completely drawn into his strange and brutally intense predicament.
Should Have Been Nominated: Ryan Gosling, Blue Valentine

Best Actress
Will Win: Natalie Portman, Black Swan. She gave a great performance, she’s “young and hot,” and she prepared for the role for about a year. Just give it to her already. Poor Annette Bening, even with Hilary Swank not even nominated she’s still being sidelined by the hot young thing. There’s a chance she could still pull it off: Black Swan didn’t get nearly as many nominations as most people predicted (not even for screenplay) which could possibly expose the film’s potential weakness.
Should Win: Annette Bening, The Kids Are All Right. Look I love both of these performances and since Bening was robbed for American Beauty, she deserves a little naked golden man.
Should Have Been Nominated: Julianne Moore, The Kids Are All Right

Best Supporting Actor
Will Win: Christian Bale, The Fighter. He gave another great performance, but finally in a movie that Academy likes. I’m worried that love of The King’s Speech could give Rush the edge here, but I’m still thinking Bale pulls it off. I don’t think the others even have a shot.
Should Win: Christian Bale, The Fighter. In any year any of these five actors could win for their performances here. This was a great year for supporting performances. But Bale just sticks out here with such a juicy role which is actually the most entertaining plot line of the film. He’s a scene stealer and that’s a great supporting performance
Should Have Been Nominated: Sam Rockwell, Conviction

Best Supporting Actress
Will Win: Melissa Leo, The Fighter. This is also going to be a close race. Leo has most of the precursor awards but a possible vote split with her Fighter co-star Amy Adams could hurt, which could lead to a victory by the young Hailee Steinfeld (or even in a King’s Speech sweep Carter). Leo is the safest bet, but literally anything can happen in this category. Anything.
Should Win: Amy Adams, The Fighter. I love both the supporting actresses in The Fighter, but I’ve been an Adams fan longer. She should have won for Junebug, and a win here would correct that. And to think she wasn’t even nominated for Enchanted. For shame, Academy!
Should Have Been Nominated: Mila Kunis, Black Swan

BEST VISUAL EFFECTS
Inception
Posted by Chris at 9:49 AM

His inner case is made of ferromagnetic material, shields the rolex replica uk of magnetic fields and consists of only two parts: a container and another cover tightly screwed. The container encloses the movement laterally and on the dial side, while the back closes the movement side. In order to tag heuer replica sale ensure that the movement would be shielded as much as possible, for only a minimum of holes in the dial and the housing could designer. For this reason, there is replica watches sale opening for a date display, for example. There is only the small replica watches uk required for the elevator shaft and for the axes, which anchor the hands. There are also two small holes for the screws that hold the dial. Most of the other rolex replica with magnetic protection having an inner housing with three parts, with the tag heuer replica stacked on each other and not screwed together.

I like the post format as you create user engagement in the complete article. It seems round up of all published posts. Thanks for gauging the informative posts.
cara menggugurkan kandungan