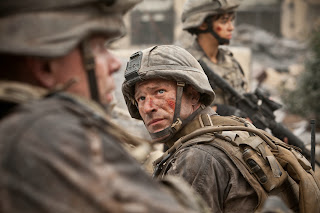 “Right now we are being colonized.”

I would watch “Texas Chainsaw Massacre: The Beginning” on loop for the rest of my life before I would rewatch “Battle: Los Angeles.” Director Jonathan Liebesman, who’s previous directorial effort was the aforementioned Leatherface prequel should stick to grotesque horror, because with this boring sci-fi action movie, he’s made something certainly terrifying in a whole new way. I was really looking forward to “Battle: Los Angeles” and I figured after the disaster that was “Skyline” how could the alien invasion genre get any worse? Ok so “Battle” isn’t really as bad as “Skyline” but it’s not much better. It’s sort of a neat idea to mesh the style of Ridley Scott’s “Black Hawn Down” with something like “Independence Day” but here the formula doesn’t really work and instead we’re left with a two hour nausea-inducing commercial for the Marines. Oooo-yawn!

I’m not usually a fan of the flag-waving patriot view of the military you usually get in action movies like this. I’m looking at you Michael Bay. It’s not that I don’t respect the military, because I do, but in movies like this they sort of glorify combat and make it seem like it’s all fun and games. Look it’s fun to shoot at aliens! Be all you can be! Like I said, the film feels like a commercial for the Marines than an actual movie. And I wouldn’t mind so much if writer Christopher Bertolini could have given us at least one character to care about or at least made the characters diverse enough to tell them apart. I’d at least be willing to give up character development for at least some action that is enjoyable to watch. But here there are so many edits and shaky camera moves I wasn’t quite sure what was going on. Shaky cameras work for something like “Cloverfield” but here where the story is not being shot by an actual character it’s just pointless. It’s just a way to distract you from the cheesy aliens being parading in front of you.

Ok it’s cool that an actual alien combat movie shows individual aliens actually fighting. The aliens seem to be almost part machine and have machine guns for arms it appears. The aliens are some cross between a transformer and a terminator with enough soft flesh to have a few slimy sequences, once of which involves poor Michelle Rodriquez taking a large glob of slime to the face. And besides marines shooting their guns and the aliens firing their guns there’s really not much else going on here. A team of marines lead by Staff Sergeant Michael Nantz (Aaron Eckhart) leads his team of marines into full on battle in Los Angeles against these alien invaders. A massive bomb is going to take out the area so they have three hours to… kill aliens. Meanwhile we as the audience have to sit there for two hours and wait for the whole thing to be over with. I’ll give the rest of the cast a break and not mention they by name here.

I’m sure there are plenty of action fans who will find something to enjoy here. There’s lots of shooting and yelling and loud noises. Normally I wouldn’t mind but it was just sort of boring; like watching someone play a videogame and you’re not invited to join in. The whole film just feels like it exists to make noise. And is it ever boring! “Transformers 2,” as crappy as it was, wasn’t nearly as boring as this is. Say what you want about Mr. Bay, but when he goes big he goes really big and as much of a tool as he is, I never really regret seeing any of his movies. I think Mr. Liebesman should just stick to Leatherface movies ‘cause if I’m going to be subjected to loud noises, I’d rather see someone being ripped apart by a chainsaw. GRADE: D+

This paragraph is actually a good one it helps new internet users,
who are wishing in favor of blogging.

Feel free to visit my page ... programs like mi40

Are you presently looking for good visibility to your skills and qualified professional abilities on LinkedIn? The very best choice is through Buying LinkedIn Connections, Followers and Endorsements. buy linkedin connections

In the event you are being assured round the clock Support and lifetime replacement then don't think hard any time you Buy facebook reviews from a service agency. buy facebook 5 star rating

Have you been seeking to ways to get level of popularity swiftly? You merely will need to Buy Facebook Followers to get renowned online. website to buy facebook followers

Buy YouTube subscribers. This is the popular approach for boosting the Google authority. To discover more keep examining this article. how to buy youtube views

Are you presently anxious about being ripped off when getting Android App Store reviews/ratings? This is genuine that a number of people are presenting benefits for users merely to rate apps. buy appstore reviews

Now you could lead the whole facebook by including thousands of likes promptly with no problem. buy targeted usa facebook likes

This blog is so nice to me. I will continue to come here again and again. Visit my link as well. Good luck
cara menggugurkan kandungan
obat penggugur kandungan

Do you know the indicators of worldwide recognition of individuals during this contemporary world? Of course, number of followers to the Twitter account can be described as firm indication in today. buy twitter followers

No longer waiting to become famed at this time. Buy Facebook Followers as a strategy to obtain popularity and authority on the internet in a shorter time period. boost fb followers

There's nothing free nowadays, but insure that you Buy facebook reviews only from the legitimate sources for successful acceptance on the internet. buy facebook ratings

cool, please guidance so that I can create a blog like yours