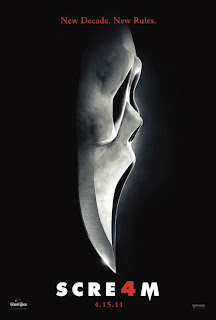 Finally after nearly eleven years another Scream film is making its way to your local multiplex and if you’re a horror junkie like me you’re probably as giddy as a schoolboy. It’s a little more rare these days that we would get a straight up sequel, with some of the actual main characters from the original films, rather than a plain old remake. But the Weinsteins, with dollar signs in their eyes, saw an opportunity too good to refuse. Let’s take the original cast and filmmakers and relaunch one of their most popular franchises. Scream 4 is supposedly the first in a new planned trilogy and if that doesn’t excite you enough, Wes Craven is interesting in directing them all. Heck even George Lucus didn’t direct six Star Wars films. So with that April 15 opening looming every so closely in the future, I’ve decide to take a look back at the films that will provide the backstory for Scream 4 (or Scre4m if you’re paying attention to those ads) and why this trilogy is such an entertaining and ultimately groundbreaking addition to the often maligned but overtly popular horror genre.

Oh to be a horror film before 1996. Let’s see what there was…well there were plenty of sequels…we had Halloween The Curse of Michael Myers, arguably one of the worst of the series… we had Leprechaun which opened the door for future Friends star Jennifer Aniston… Dr. Giggles which opened and closed without much fanfare… Interview with the Vampire was classy and even reaped Oscar noms, as did Bram Stoker’s Dracula, but come on those movies aren’t really scary they’re lavish… There were two Child’s Play sequels… Candyman was a decent success for its time… yup, the early 1990s were pretty much a bust in terms of the horror genre. With the clear exception of Wes Craven’s New Nightmare, there was nary an original or hip entry in the horror canon. New Nightmare was not a financial success… even Freddy fans were turned off by its “too hip” self-reflective approach. The early 1990s horror audience just didn’t “get it.” It was obvious that the horror genre, and more specifically the “slasher movie” was DOA. 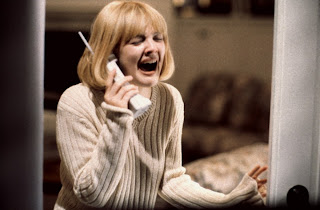 Enter fledgling screenwriter Kevin Williamson whose favorite film Halloween inspired what was to become one of the most original horror movie scripts in the history of the genre. His “Scary Movie” script was passed around Hollywood and started a bidding war which was eventually snatched up by those money grubbing Weinsteins. They hired Wes Craven, whose last film was the Eddie Murphy urban vampire flick “Vampire in Brooklyn.” Not only would this next film reinvent an entire genre, but it would revamp Craven’s entire career. Now Craven wouldn’t just be known as the guy who directed “A Nightmare on Elm Street” but also the newly retitled “Scream” a wonderfully subversive take on the slasher movie clichés that audiences had gobbled down for years and years throughout the 70s and 80s. The film featured an extraordinarily well-executed opening sequence which dispatched teen star Drew Barrymore and relaunched her career ala John Travolta in “Pulp Fiction.” The opening scene in which Drew, as horror savvy high schooler Casey Becker, is stalked on the phone by a menacing voice who forces her to answer horror trivia questions is arguably one of the best staged sequences in slasher movie history. It’s really a short film that could exist without even the rest of the film existing. Seriously. Watch it and then turn off the movie and your slasher movie craving will be more than satisfied. But the rest of the movie is simply horror movie gold. The script is about teens who grew up watching horror movies, just like the many fans watching the film. They talk about these movies and their performers and they discuss the clichés we’ve all gleaned from watching these types of films over and over again. The irony is that while the Scream characters scorn movie characters for doing stupid things (like running up the stairs when they should be running out the front door), they do them anyways. One character, Randy Meeks (Jamie Kennedy), even has compiled a list of horror movie “rules” in order to survive a scary movie. These include not drinking, having sex or saying you’ll “be right back.” Each one of these rules are broken in “Scream.” Oh how I can remember almost jumping out of my skin first watching “Scream” when it first came out on video. It scared me and yet I couldn’t get enough. I even made the mistake of watching it all alone again the next day. How I couldn’t get enough. 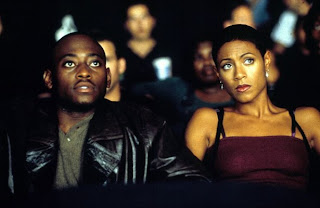 The first “Scream” was a great film in its own right. It was obvious due to the success of the first film that a sequel was bound to happen. And it did, just one year later. And of course the movie savvy characters discuss sequels in this sequel ‘cause they know they’re in a sequel. While the first film had the ingenious twist of having two killers, which was a twist literally no one on the planet saw coming, with the sequel it was now known that literally anything could happen. Maybe this time there would be three killers? “Scream 2” followed the first film’s hip, self-reflective style and opens with a sequence in which two college kids (who look awfully old to be in college - perhaps they were just going back to get their Bachelors?) attend a premiere of a movie called “Stab” which is based on the events that took place in the first “Scream.” Here we hardcore Scream fans get a reenactment of events from the opening of the first film starring Heather Graham in the Drew Barrymore role. (And later on an ingenius cameo from Tori Spelling as heroine Sidney Prescott)This is played out against our two new characters quickly being stabbed to death, inside a crazy-packed movie theater (but not before having the African American characters fittingly point out that slasher movies rarely feature Black characters). While I don’t personally find this sequel to be as scary or intense as the first film, Craven has to be given credit for constructing some pretty innovative sequences. For instance, it’s in his genius that he can manage to make an open college campus quad in the middle of the day ominous. There are people all around and yet Ghostface manages to snatch a victim within plain sight. And a scene that takes place in a crashed cop car is a pretty great showcase for suspense. The film’s climax, while not as well-done as in the original, is set on a theater stage in an eerie take on "life imitating art" and while the film ends wraps things up nice and neatly, we weren’t all too shocked to learn there would be a part three. 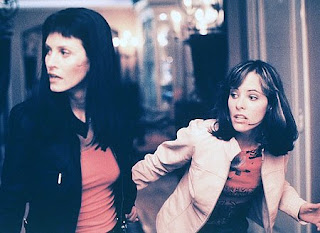 If “Scream 2” was about life imitating art, then this third chapter is about life imitating art imitating life. This film doesn’t take place in high school or in college, but appropriately takes place in the “real world” or rather the real world as only Hollywood could imagine it. It’s now several years later, and so much time has passed that there’s already a “Stab 3” movie in production. So instead of college co-eds here our supporting cast are actors and filmmakers. Funny lady Parker Posey plays Jennifer Jolie who plays Gale Weathers in the Stab films. She gets super excited when she gets to meet the actual Gale Weathers (Courtney Cox) and this doppelganger comically clings to her as if she were her real life twin. The Scream films have always been known for their humor and with the death of Randy Meeks in Scream 2, we needed a new comic relief character. And you can’t go wrong with Posey. It turns out that our heroine Sidney Prescott (Neve Campbell) is in hiding but a new string of murders brings her out to get rid of her haunted past for good. She teams up with the lovably doofy Dewey Riley (David Arquette). In most cases the third act of a trilogy is about going back to the beginning (the subtitle of Stab 3 is appropriately “Return to Woodsboro”) and we learn things we never knew we never knew. It’s important to note that by the time “Scream 3” was released in February 2000, there had been so many “Scream” imitations it was hard to keep track. Movies like “I Know What You Did Last Summer, “Urban Legend” and even a new “Halloween” flick which has a very Scream-like vibe about it. So not surprisingly “Scream 3” sort of had a lukewarm reception. It’s ironic that the hip flick that restarted the slasher genre sort of became a parody of itself and in so doing, “Scream 3” sort of remains the least scary of the trilogy (and for some reason the least gory) and yet it’s definitely the most tongue-in-cheek. It followed the same formula of the first two films: a shocking opening murder, the reintroduction of heroine Sidney Prescott, Gale Weathers being a bitch, comic relief, hip dialogue, Dewey almost dying, and the revelation of the killer, who must be shot in the head in order to be killed (and this one adds some great cameos from Jay and Silent Bob and even Carrie Fisher). It doesn’t hide the fact that it’s so obviously attempting to be a movie about movies. And even without Kevin Williamson in the writer’s chair it ultimately retains the style of the first two films and concludes the series in a mostly satisfying way.

Overall you can’t deny the impact of the Scream series. The countless imitations it caused made it one of the most influential films in the horror genre since the first “Halloween” film in 1978. Ghostface simply represented the 1990s horror slasher. While Leatherface and Michael Myers ruled the 70s and Jason Voorhees and Freddy Krueger ruled the 80s. Of course, eventually people sort of got sick of the hip style of these self-referential slasher flicks and the horror film sort of took a nosedive into what became “torture porn” subgenre in the 00s (And let’s not forget the funny parody series “Scary Movie” which itself inspired a whole slew of horrible, unfunny spoofs). It’s interesting to note that while the post-Scream slasher films were hip they weren’t all that fantastically gory. Sure there was lots of blood, but no real guts. Let us remember that the original Scream featured not only one but two disembowelings. It’s great that Scream was able to mix such shocking images with such clever and funny dialogue and feature characters worth caring about and a twisty plot that was too good to resist. Here’s hoping that the fourth entry in the series can go back to what made “Scream” so good in the first place. Scream: A+; Scream 2: A-; Scream 3: B+

Check out the trailer for Scream 4 below and watch it 500 times like I have already. The three Scream films also arrive on Blu-ray March 29th.