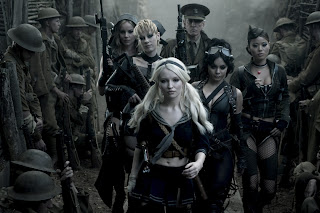 “If you don’t stand for something, you’ll fall for anything.”

I’m a little wishy-washy about the cinematic “style” of one Zack Snyder. And that’s probably why my favorite of his films remains his sleek “Dawn of the Dead” remake from 2004. Or it could just be the fact that I remain partial to the horror genre. I remain that his “Watchmen” flick is certainly an ambitious and wonderfully artistic undertaking and “Legends of the Guardians” was a fun animated adventure. The less said about “300” the better. And that brings us to his most recent cinematic romp “Sucker Punch” which sort of has elements of all of these movies.

Say what you want about Snyder’s films as a whole, but her certainly knows how to open a movie. I can recommend “Watchmen,” “Dawn of the Dead” and now “Sucker Punch” based on the film’s opening sequences alone. “Sucker Punch” opens an nary a line of dialogue is uttered and yet the whole film’s story is set up. It’s all set to an updated version of “Sweet Dreams (Are Made of This).” A young woman’s mother dies and her disgruntled stepfather is not thrilled to learn that his wife’s daughters will be getting the inheritance. He tries to abuse this girl, who’s only known as Baby Doll (Emily Browning), and when he tries to attack her younger sister Baby Doll accidently shoots and kills her sister. The stepfather sends her away to a mental institution in Brattleboro, VT where she awaits a lobotomy that will keep her quite for good.

Once our heroine realizes she’s about to get a long piece of metal plunged into her brain she enters a dream like reality where she conceives the mental institution as a burlesque theater-like brothel where the other “patients” are there to dance and perform and meet the need of male clients. She has five days before an unseen client known only as the High Roller will meet with her (which in reality is the doctor who is coming to lobotomize her). While she’s in this “world” she makes friends with the other girls who include Rocket (Jenna Malone) whom she saves from the creepy cook’s clutches, Rocket’s sister Sweet Pea (Abbie Cornish), Blondie (Vanessa Hudgens) and Amber (Jamie Chung). Without getting to far into specific plot details, it turns out that even in this “alternate world,” Baby Doll can actually go further into a fantasy world in which she battles monsters, robots and steam-punk WWI soldiers. It is in here where she learns she needs to collect five items which will eventually help the girls escape their mental prison, literally and figuratively.

Having said all that, I’m actually sort of surprised how easy it was to buy into all of this. The film’s “you must find five items” story seems just like the plot of a video game and the film’s grayscale and slow motion visuals certainly don’t make it the most stylistically original film out there, but the whole this was relatively easy to swallow. I liked how the fantasy sequences existed only in Baby Doll’s mind when she begins her dancing. I like having a line between reality and fantasy because it helps me ease into seeing something fantastical like flying dragons etc. It’s possible most people will laugh off the silly plot and the fact that the girls are “trained” by a psychiatrist named Dr. Gorski (Carla Gugino doing the best stereotypically cheesy Polish accent possible) makes some of these scenes feel like they’ve been ripped from some ill-conceived Bob Fosse musical reject. The movie is ridiculous enough you’d think they might as well of had musical numbers too. I appreciate Snyder’s goal to finally produce an original story and he does get decent enough performers from his actors…considering one is from High School Musical and one is a former Real World cast member. And he is pretty good at constructing good music cues on his soundtrack.

A lot of people will see this movie because of the fantastical elements, cool fighting sequences and because the girls mostly run around in midriff revealing outfits and they shoot big guns. Its PG-13 rating is a warning enough that there’s very little actual overt sexuality here so those seeking titillation are better off watching Cinemax when they get home. And anyone who thinks this movie is exploitative of women obviously hasn’t seen a slasher flick. This is just a simple genre flick with no real higher aspirations and like the other Zack Snyder flicks that have come and gone it will fade blissfully from memory until the next geeky sci-fi fantasy video game comic book type movie hits the big screen. GRADE: B