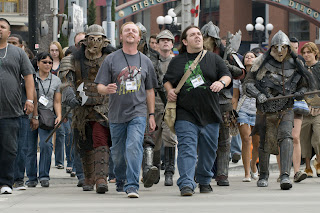 “Are you gonna draw me like one of your French girls, Jack?”

Curious if you think you’d like “Paul” about two goofs who run into a stranded wisecracking alien during their road trip tour of geeky, obscure alien sites? Did you love “Shaun of the Dead” or “Hot Fuzz?” Do you have a particular love of the films of Steven Spielberg and George Lucas? Are you obsessed with Comic-Con, aliens or quoting movies? Odds are if you answered yes to any of the above questions then you’re bound to love the movie “Paul” like I did (And I’m not even obsessed with aliens or George Lucas like some people tend to be… you know who you are). “Paul” is written by the guys who stared in “Shaun of the Dead” those British funny guys Simon Pegg and Nick Frost. And it’s from the guy who directed “Superbad” (Greg Mottola). So right away you know you’re in for a raunchy, pop cultured-filled adventure that will certainly bring out the immature 15 year old boy in all of us.

Paul is an alien from outer space. He accidentally crashes his spaceship somewhere where Area 51 is currently located, back in the 1940s. He has been held captive by scientists who have been probing and prodding him and were about to cut out his brain when he escaped and happen to run into two sci-fi geeks who happen to be touring UFO sites. Paul is voiced by Seth Rogen, so you’re not surprised when Paul starts sprouting out movie lines, foul language, and lighting up joints. These goofs Graeme (Pegg) and Clive (Frost) reluctantly let Paul hang out in their RV and give him a ride to where Paul is supposed to make contact with his fellow spacemen.

Of course, with an alien on the lose there are many folks in black suits after him. One of those guys is Jason Bateman playing the straight man which we all know he does so well. He’s being ordered around by “The Big Guy” whose voice we recognize as the alien ass-kicking Sigourney Weaver. And Bateman in turn is bossing around Haggard (Bill Hader) and O’Reilly (the weird guy from “Superbad” whose name no one knows…it’s Joe Lo Truglio) who slowly become aware of the fact that their mission is to track down a space alien who is on the run. Graeme and Clive meet a bunch of colorful characters along the way, which tends to happen in road movies. The best is definitely Ruth Buggs (an always wonderful Kristin Wiig) who begins as a one-eyed Bible thumper and then finds new freedom as a profanity-spewing gal whose new number one interest is fornicating.

“Paul” is a movie about sci-fi geeks made to be watched by sci-fi geeks. There are plenty of references to everything from “Back to the Future” to “Aliens.” And even more random references like Titanic and even the Susan Sarandon drama “Lorenzo’s Oil” (Bateman’s character’s name is revealed to be Lorenzo Zoil). There are too many great scenes and lines (and cameos) to spoil here so odds are if you’re a movie junkie you will find something to like about “Paul.” And Rogen does such a great job of bringing his character to life. You’ll be amazed at how quickly you become attached to that little space dude.

Is “Paul” the best movie ever made? No. Is the funniest? No. But it’s certainly one of the best movies currently playing at a theater near you. It certainly fits nicely with movies like “Shaun of the Dead” and “Superbad,” although it kind of felt like a cross between “Zombieland” and “Pineapple Express” meets “E.T.” Unless you’ve never even heard of any of the movies I’ve mentioned, you’re bound to enjoy it. GRADE: B+

Hmm is anyone else having problems with the pictures on this blog loading?
I'm trying to determine if its a problem
on my end or if it's the blog. Any suggestions would be greatly appreciated.

Hi there just wanted to give you a quick heads up. The
words in your post seem to be running off the screen in Chrome.
I'm not sure if this is a format issue or something to do with internet browser compatibility but I figured I'd post to let you know.
The design and style look great though! Hope you get the issue fixed soon. Many thanks

No longer longing to become popular right now. Buy Facebook Followers as a strategy to gain status and acceptance on internet in a small period. buy real facebook followers